India’s secularism cannot be ‘shaken’ due to language: Narendra Modi 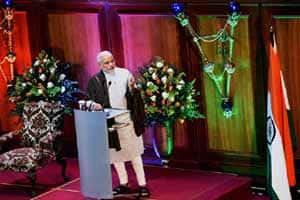 Against the backdrop of a row over Sanskrit replacing German in government run schools in India, Prime Minister Narendra Modi tonight said India’s secularism is not so weak that it will be “shaken” because of a language and there was a need for having “self-confidence”.

Addressing a reception for the Indian community here, Modi referred to a time decades ago when German radio used to have news bulletin in Sanskrit.

“In India, there was no news bulletin in Sanskrit at that time because perhaps it was thought that secularism would be endangered,” the Prime Minister said.

“India’s secularism is not so weak that it will be shaken just because of a language. One should have self-confidence. Self-confidence should not be shaken,” he said.

Modi did not elaborate but his veiled comments assume significance as these came months after a row over replacing of German as third language in government-run Kendriya Vidyalaya schools with Sanskrit.