China has signalled its willingness to discuss India’s membership into the Nuclear Suppliers Group – but how realistic are its chances of agreeing? 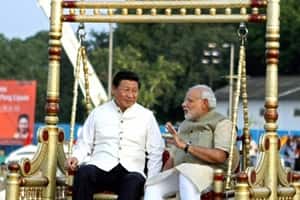 China's conduct in the South China Sea has raised eyebrows in the US and also raised concerns in India. (PTI)

China has signalled its willingness to discuss India’s membership into the Nuclear Suppliers Group – but how realistic are its chances of agreeing? Is India’s entry into the NSG inevitable? For how long can China continue to oppose India’s NSG bid? Ahead of the BRICS Summit, China has raised hopes of arriving at a consensus on this long pending issues, and all eyes are on the Narendra Modi government to pull off this diplomatic victory. PM Modi will meet Chinese President Xi Jinping on the sidelines of the BRICS Summit this weekend, and the NSG issue is likely to come up for discussion. Indeed, if the Modi government is able to secure the NSG membership for India, it would go down in the history as one of the most important foreign policy achievements. But, as Modi government would already know, with China, the unpredictability quotient is very high and with the Chinese dragon’s increasing importance in the world, it’s anybody’s guess if the neighbouring country will relent.

As Professor Phunchok Stobdan, Senior Fellow at Institute for Defence Studies and Analyses (IDSA) says, “Understanding China is an art, not a science”. Speaking to FE Online after China’s statement, Stobdan said, “China has always had an edge over India when it comes to diplomatic manoeuvring because they have focused on larger goals, unlike India. Terrorism is not important for them, so why would they relent on the matter of Masood Azhar? Similarly, NSG is not very important for them. They will bargain with India when they seek a larger benefit”. “For example, China wants a Free Trade Agreement (FTA) between BRICS. This FTA would benefit only China because it would dominate trade among BRICS. Now, for all you know it may ask India to support its FTA bid, and in return get the NSG support,” he said. “But, this is all speculation, with China, one never really knows,” he cautioned.

NSG membership will be a significant boost for India which is seeking to expand its atomic energy sector. NSG’s members are allowed to trade in and export nuclear technology. PM Narendra Modi has been aggressively pushing for India’s NSG case because it would help the multi-billion-dollar drive to build nuclear power plants in partnership with the US, Russia and France. All three of them have backed India’s entry bid and are hopeful that a deal can be sealed without India having to sign the NPT. India has been refusing to sign the nuclear Non-Proliferation Treaty (NPT), saying that its track record of non-proliferation should be enough for it to bag the NSG entry. Additionally, India’s bid for a full membership, if granted, would tip the balance of power in South Asia against Pakistan. Interestingly, Pakistan’s application has been backed by China, despite questions over its proliferation record. China has been able to block India’s entry using the veto power since the system works on the basis of consensus. In fact, despite PM Modi attempts to reach out to Xi Jinping, China had stopped India’s NSG entry this June.

Rajeswari Pillai Rajagopalan, Senior Fellow and Head, Nuclear & Space Policy Initiative at ORF is not enthused by China’s latest comment. “This is all political posturing from China’s end. Ahead of the BRICS Summit, they are making polite statements. I doubt if China will relent easily on the issue of NSG,” Rajagopalan told FE Online. Rajagopalan is of the view that even though China has signalled willingness to talk, it continues with its stand that there has to be consensus and that India needs to sign the NPT. “The situation has changed from 2008 when the US urged China to relent, and it did,” she said. Back then, the NSG had granted an exclusive waiver for India in 2008 to access civil nuclear technology. “However, now China is a much more powerful. I believe that no amount of international pressure will make China agree to India’s permanent NSG bid unless it decides to do so on its own,” she added.

However, Colonel KV Kuber, Independent Consultant Defence and Aerospace is quite optimistic about India’s chances of achieving a breakthrough. Kuber feels that China will have to eventually act as a responsible world power. “To my mind, it is a matter of fait accompli as far as China’s prospective support for India’s NSG bid goes. China will fall in line and it will have to because it wants to be seen as a responsible world power,” Kuber told FE Online.

Kuber feels that at a time when most major powers are supporting India’s entry, China can only block it for some time, but not long, because the international sentiment is in India’s favour. “Also India has made a strong statement to the world, by carrying out surgical strikes, and by indicating that the Indus Waters Treaty will be reviewed. There is also a strong strategic push from India’s end, especially on the military front,” he substantiates. “We have signed the Rafale deal, there is a buzz around Predator drones, so India is getting into a position of strength, which can’t be ignored for long. In that sense, China will most likely accept the rise of India, as a responsible power, it has to accept India as a major world power. In my view, China may have no option but to agree to India’s NSG entry as early as the next plenary meet,” he concludes.