From Uri attack, Balochistan to Indus Waters Treaty he spoke on various issues. We take a look at five hard-hitting things that Musharraf said about India. 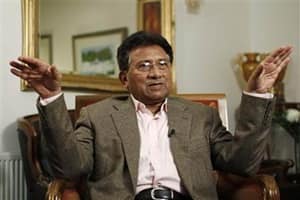 Claiming that he did not knew that Osama bin Laden was living in Pakistan, Musharraf objected to his hideout being called a palace.

Calling External Affairs Minister Sushma Swaraj’s cosmetic, Pervez Musharraf in an interview to India Today expressed his sadness on India pulling out of the SAARC summit. He further added that the Uri attack in Kashmir, is being escalated to a political level. From Uri attack, Balochistan to Indus Waters Treaty he spoke on various issues. We take a look at five hard-hitting things that Musharraf said about India in the interview:

1) On Uri attack: Musharraf said that Pakistan is not responsible for Uri and is being unnecessarily blamed for it. “You are looking at effects of Uri attack. This is a way too serious issue to be dealt with emotionally. Immediately after every incident, in the next 12 hours Pakistan is blamed. Not only Pakistan, you say it is the Pakistan government and the Army that is responsible,” he said.

3) On Balochistan: The former army General also questioned India’s interference in Balochistan. “50% of Balochis are strongly pro-Pakistan,” he said. He also blamed RAW of facilitating separatism going on in Balochistan. “There are a few separatists in Balochistan who are playing under RAW. Those who stay in Pakistan, burn Pakistan’s flag and raise anti-national slogans deserve to be butchered,” said Musharraf.

4) On Peace: Talking about peace, he said, “I don’t believe in India bashing, I believe in peace with India. There has to be a resolution with the cause which is Kashmir. But you cannot have peace at our cost, on your dictation. Let there be a give and take,” said Musharraf.

5) On Burhan Wani: In the interview, Musharraf also claimed Burhan Wani was a ‘great freedom fighter’ and blamed the Indian government of ignorance for the 80 people killed during unrest in the Kashmir valley by the Indian army.

Meanwhile, apart from India, Bangladesh and Bhutan have also pulled out of the SAARC Summit in Islamabad in November, saying the environment is not right for the successful holding of the meet. The decision by three countries of the eight-member grouping not to attend the summit would lead to its collapse.