At the sixth edition of the eight-part IE Thinc Migration series, presented by The Indian Express with Omidyar Network India and moderated by deputy associate editor Udit Misra, panelists discussed solutions around complexities in regulation, migrant identity, credit worthiness and their role in providing housing for migrants 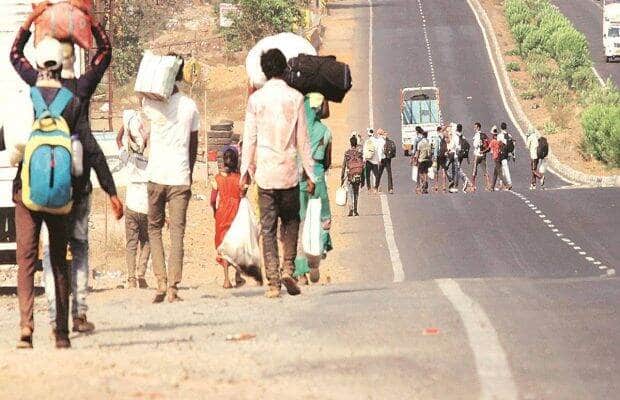 Anyone who comes to Mumbai, instead of staying in an unauthorised manner in slums, can be given this rented accommodation till he gets a proper place. (File photo: IE)

Migrant labour is the backbone of the economy. They have a major role in developing the country. The government of Maharashtra had passed a very ambitious new housing policy way back in 2008, where the concept of rental housing was launched for the first time. The Mumbai Metropolitan Region Development Authority (MMRDA) was made a nodal agency for the entire MMR — these are eight-nine municipal corporations in and around Mumbai, including MCGM (Municipal Corporation for Greater Mumbai), which houses almost 2.5 crore population and more than a million migrant population. And this rental housing would be provided to migrant labourers by charging some nominal monthly rent. Many developers came forward. So, right now, 42,000 tenements are under construction, which can house more than a lakh people. The 42,000 tenements, which have sanctions, include major real estate players like Tata, Dosti Group, Symphony and Adhiraj. Anyone who comes to Mumbai, instead of staying in an unauthorised manner in slums, can be given this rented accommodation till he gets a proper place. Then we came up with this very ambitious policy of accommodation reservation under which we will build a sizeable amount of rental housing in the next five years. This is something which can help migrant labourers. I’m sure this idea can be replicated in many bigger cities of India, where the local municipal authority doesn’t shell out anything at all except the construction cost of that building.

Gautam Bhan: Migrants are not unmarked bodies that come only into housing markets marked by demand and supply. They are a part of deep identity-linked movements that are shaped in certain ways. So why do we not learn from migrants on how they have produced that housing and what can we do to make this process easier, shorter and better. I think it’s important that we don’t start seeing migrants as helpless, invisible, unseen. They are hyper visible and deliberately invisibilised.

We can’t build our way out of India’s housing shortage. We will never, no matter how well-intentioned the government is, have the capacity to build at the scale we want. The largest stock of affordable housing in Indian cities has been built by people themselves, always in tension with law and planning. But the major work has to say: protect, regulate, recognise all the informal, inadequate rental housing that is all over our cities today. Begin to protect and improve that housing.

On jurisdiction and government responsibility

Shrayana Bhattacharya: The solution always seems to be a scheme and it’s the same housing scheme. One of the key principles of the housing policy has to be decentralisation. It has to allow and empower local governments, not just at the state level, I would contend, particularly if you look at the Mexican, Brazilian, or even Chinese examples, the way a lot of these problems are addressed is not by having a one-size-fits-all programme. It in fact, creates regulation, which allows for a lot more dynamism.

On what’s holding back the state government

On understanding if housing is only an urban problem

Shrayana: The first principle is extremely empowered municipal governments, not this same scheme, PMAY, which runs exactly the same way with the same benefit levels. The second is that the focus in India tends to be very supply-side driven. It’s around land housing construction. Obviously, there are very serious and grave regulatory challenges around this. What the government perhaps needs to do along with the employer is provide a basket of cash as well as insurance benefits. And the third would be just the capacity of the delivery system, not just an audit. If you’re moving, then you should have a system of social protection that moves with you.

On solutions for a complex issue

Bhide: We need to think of a continuum. I hope we will be able to create a few amenities for women migrants — a very vulnerable contingent, often not recognised at all.

There is a tripartite partnership, which can be created between the state, agencies and the employers. The employer’s role in this is immense. On the other end of the continuum, we need to focus on how one can reduce the precarity of housing, because there are several housing conditions, which shouldn’t be accepted. We need to look at informal housing and begin earlier. There is no issue of acquisition — the more you’re able to upgrade the living conditions in the informal settlements, the conditions of rental housing would improve. I hope this will also contribute to creating a basic floor below which a quality of housing will not go. But if there are these kind of precarious housing conditions, one needs a velvet-glove approach, where the state comes in with regulatory policies but also comes in with facilitative policies. Our systems have macro details, but they don’t have the micro knowledge of how things operate, of what things exist.