The session ended with the observation that there are several challenges that remain especially in rural areas such as lack of awareness, issues of rural internet connectivity that is hampering the integration of women migrants. 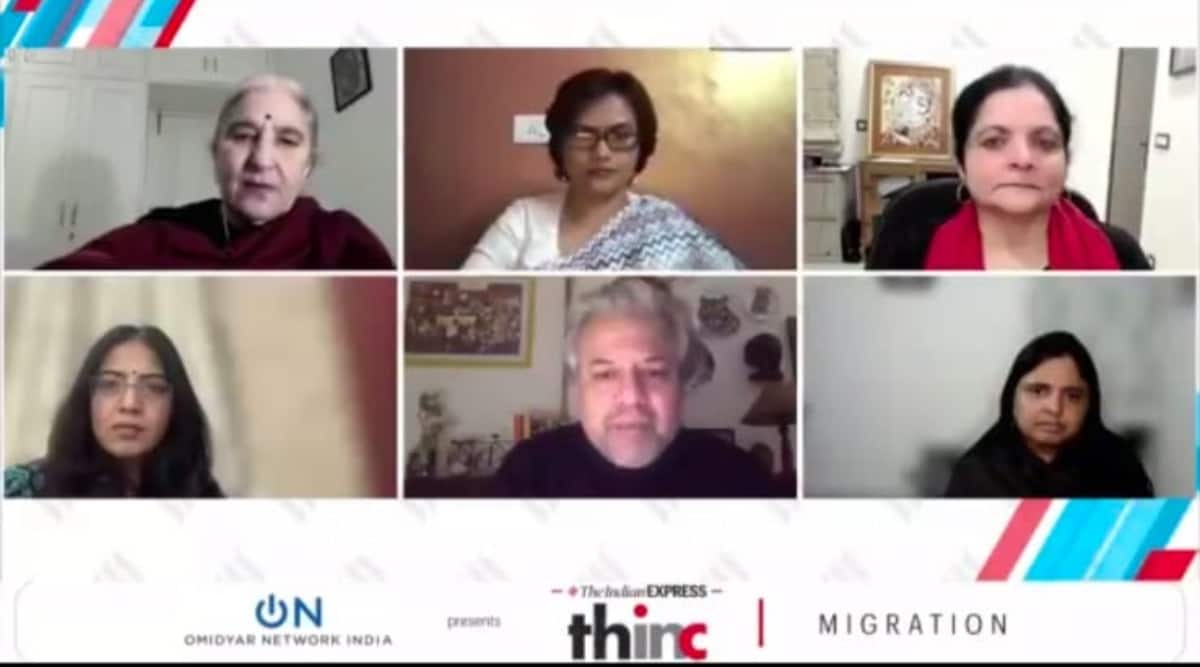 India has has close to 600 million internal migrants. Experts feel policymakers must address the issue of double invisibility of women migrants.

The third wave of the Omicron-led coronavirus infections in India has brought back the dark memories of migrants’ exodus from cities that the country witnessed during the first two waves of the Covid-19 cases. As of now, the Centre has maintained that there are no internal migration happening this time around. However, in a country with over 600 million internal migrants, the issues related to the unorganised workforce need a more holistic approach. In fact, the contagion has highlighted the deep-rooted issues of vulnerability and identity crisis among the migrant workforce. Amid such perennial economic tragedy, the seventh edition of ‘Thinc Migration’ by The Indian Express held on Thursday put a spotlight on the most vulnerable among the marginalised – women and children. Presented by Omidyar Network India, the panel discussion, which was held in form of a webinar was opened by the keynote address by Renana Jhabvala. Awarded a Padma Shri by the Government of India in the year 1990, Jhabvala is known for her stellar work in the field of social work. She is Chair of the Self-Employed Women’s Association (SEWA-Bharat).

“As far as migrants go, we have to remember that women are the original migrants, who have to migrate at a young age due to marriage. They have to adjust to new family or work. They have no identity, no social support….let us focus on women migrants apart from the newly-married women. This happens in three ways – migration of family for employment, women also go along with the family; migration of women alone for employment. Girls from Jharkhand, Bengal, and Odisha are seen working as domestic helps or factory workers in cities. And thirdly, something which people don’t talk much is the effect of male migration on women left behind. Now if we look into both types of migration – one is seasonal – rural to urban (mainly construction); second – rural to rural (mainly agricultural); second are the new migrants, which are not seasonal in nature. They may remain in new migrants due to lack of integration into the cities up to five years or even 10 years,” Jhabvala said.

The SEWA Chair also said that if one looks at the issues of the women migrants from the lens of Covid, their problems have ‘really magnified.’. “…Covid was a long crisis, but there are many short crises. This results in their income getting impacted. Now, if you look at urban areas, both short-term and long-term migrants, women are rarely counted. This is a whole issue of statistics…. Domestic work or home-based workers are rarely counted. I have many studies show that our statistics really, really undercount them. So that they in most ways in the country do not exist. I mean they exist but they don’t exist to any policymaker or anywhere.” Talking about the scenarios in the first wave of Covid infections, Jhabvala spoke about how migrants were on the edge of starvation. She also highlighted the fact that women migrants don’t have ‘any identity’.

“Migrants are so important for our economy. But they are so exploited. One nation, one card is an important policy that needs to take place. There is very little social security for migrants, cash transfers are very crucial. Transfer of education is essential. These migrants need a better identity other than Aadhaar. This new movement of e-Sharm card needs to be universal for each worker.”

Jhabvala also highlighted the issue of lack of identity for women in the agriculture sector. She stated that women have already taken over agricultural work from men all over. However, they are not recognised as farmers as the land is in the men’s name. Main point is to recognise the women migrant workers, be it domestic or otherwise. Secondly, she also said that young women migrants need extra protection from abuse. “It is a dark picture and a lot that can be done. It’s really wonderful that people are beginning to realise that migrant workers are so important for all of us,” Jhabvala concluded.

On the number game of the migrants, Sonalde Desai, Professor & Centre Director, NCAER-NDIC said that “statistics often tell you the half-truths.” Unpacking the data, Desai said that the most troubling factor is the lack of data for the women whose husbands have migrated to cities for work and they have been left behind. Desai said that ‘virtually, we have no data on this group.’ She also said that marriage migration is a concept chiefly witnessed in North India. The number of women being left behind by their husbands in the villages are largely based out of Uttar Pradesh, Bihar and Rajasthan and this number is rising over the years. The most remarkable observation was that in India, 67 per cent of the migrant work force are women.

Dipa Sinha, Assistant Professor, Ambedkar University said that the main issue is the invisibility of the migrant women. Sinha added that while each group of women migrants would have a different set of needs, there are certain universal entitlements, rights that must be provided to all women migrants. Universality of the schemes needs better implementation, she added.

On the trend of the declining number of women workers in the MNREGA jobs, Rajeshwari B, MGNREGA Commissioner, Jharkhand said that the state has arrested the trend. She also said that its not about ‘men taking over women’s job’ because the scheme is about 100 days job for each household. Rajeshwari B said that women may not be very comfortable in such ‘mitti ka kaam’.

The session ended with the observation that there are several challenges that remain especially in rural areas such as lack of awareness, issues of rural internet connectivity that is hampering the integration of women migrants. The core issue is about recognition. Till the policymakers count and recognise women migrants as separate groups and make policies with focus on them, majority of India’s migrants would remain marginalised.