Till Narendra Modi is PM no one can harm India: Smriti Irani on JNU

Taking an aggressive stand on the issue of nationalism, Union Human Resource Development Minister Smriti Irani on Wednesday said till Narendra Modi is Prime Minister nobody can harm the country. 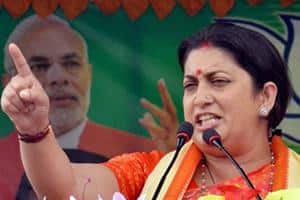 Taking an aggressive stand on the issue of nationalism, Union Human Resource Development Minister Smriti Irani on Wednesday said till Narendra Modi is Prime Minister nobody can harm the country.

“Our attempt is to create an environment in India where those who want to contribute towards uplift of the country be empowered. Those who want to break the country into pieces, they are warned that till Narendra Modiji is Prime Minister nobody can harm the country,” she told mediapersons replying to a query on alleged anti-national sloganeering at JNU.

Hundreds of BJP workers led by Irani and Gujarat BJP chief Vijay Rupani took out the Gaurav Kooch from Nawapura area of the city. The march culminated at Makkai Bridge in Nanpura area.

Rupani said, “BJP is the world’s biggest party having 11 crore registered members, and we are ruling in 13 states in India, including Jammu and Kashmir (in alliance with PDP). The ideology of BJP is that party is bigger than a person, and the nation is bigger than the party. Nationalism is the main objective of our party. To spread nationalism and love for country, especially after recent issues like in the Jawaharlal Nehru University row, we are taking out the rallies in Gujarat.”

Many Muslims also participated in the rally. The rally passed through 18 localities, covering the main walled-city area of Surat, but did not touch the Patidar-dominated areas.

In Ahmedabad, the march was led by Chief Minister Anandiben Patel, who besides praising the Narendra Modi government for its “pro-poor policies”, asked party workers to inherit the legacy of former prime minister Atal Bihari Vajpayee.

Union Health Minister J P Nadda also participated in the three-km march from Vallabhbhai Patel statue at Usmanpura to Subhash Bridge. He said BJP has “championed” the cause of nationalism and asked party activists to “thank God that he had made you a BJP worker because this is only party which ensures that you are in the right place”.

The Vadodara unit of BJP took out a grand rally on its Foundation Day through the crowded market areas of the city — steering clear of the sensitive minority dominated areas. The rally began from Vadodara’s Market Char Rasta and was led by MoS for Petroleum and Natural Gas Dharmendra Pradhan, Gujarat minister Pradeepsinh Jadeja, and Vadodara MP Ranjan Bhatt.

Interacting with the media, Pradhan raised the issue surrounding Bharat Mata ki Jai. He said, “We have not forced anyone to say Bharat Mata Ki Jai. Those who want to say it can say it and those who do not wish to chant the slogan may not say.”

In Rajkot, a similar rally was led by former Gujarat BJP chief Ranchhod Faldu who accused Congress of “scathing the pride of Bharat Mata”, and giving birth to “to elements who have done vastraharan of Bharat Mata”.

“Our leaders sacrificed their lives to drive away the British and win freedom. Unfortunately, however, reign of power then went into hands of Congress which provided a government wedded to Western culture. Under such a rule, India’s culture of spiritualism and pride of Bharat Mata were scathed as it gave birth to elements who have courage to disrespect Bharat Mata,” Faldu said while addressing BJP workers. Union Minister of State for Agriculture and Farmers’ Welfare Mohan Kundariya also participated in the march, which began from Jubilee Baug and culminated at Dhebar Chowk in form of a public meeting.

Faldu alleged that due to “failure of Congress”, BJP was forced to take out “Bharat Mata Gaurav Kooch to promote patriotism” after 68 years after Independence.

“The Modi government is promoting nationalism. It is alright if one criticises his government and its policies. But, criticism of Bharat Mata won’t be tolerated. Should those who raised slogans against Bharat Mata on JNU campus be tolerated?,” Faldu asked the audience.