Heatwave In India Highlights: IMD says that Delhi may see some light rainfall in the next 72 hours. 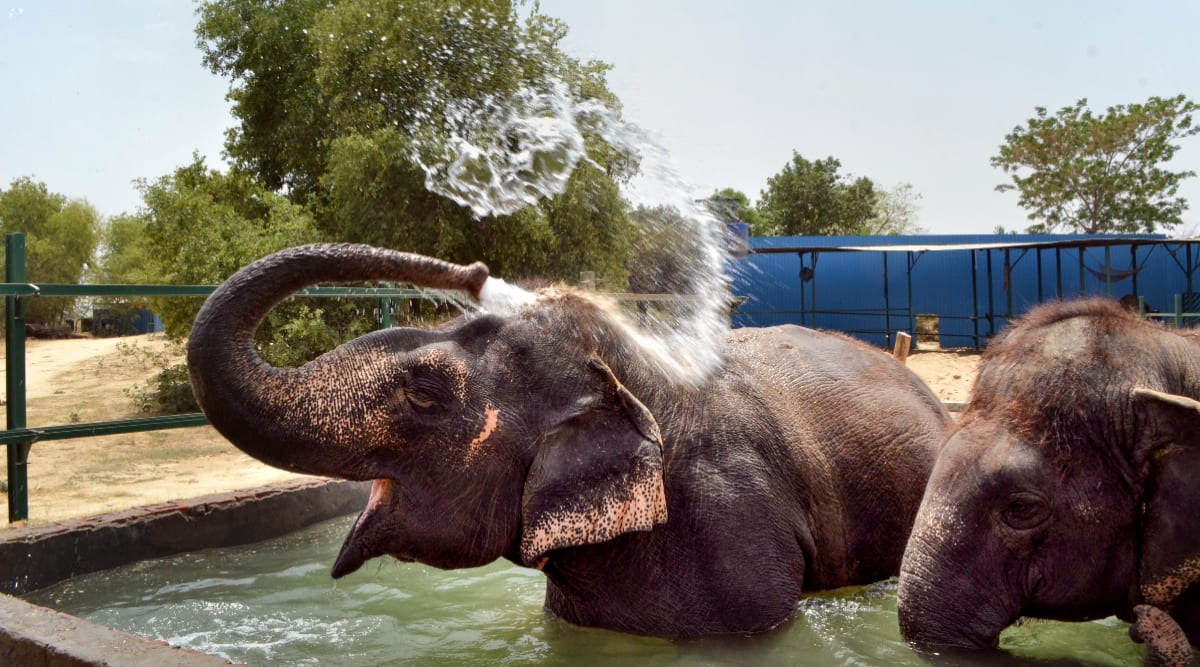 India Weather Updates Live: An elephant cools itself with water to beat the heat on a hot summer day, at Elephant Conservation and Care Centre, in Farah near Agra, Sunday, May 1, 2022. (PTI Photo)

India Weather Updates May 2nd News Highlights: Parts of North and Central India continue to reel under intense heatwave as unrelenting weather touches new records. Latest satellite images show that parts of India witnessed mercury hitting scorching 60 degree Celsius in terms of surface temperature. This kind of heat can result in melting of roads and other infrastructure. Meanwhile, an early estimate suggests that three main cereal producers – Uttar Pradesh, Haryana, Rajasthan and Punjab will suffer massive crop loss due to heatwave. The data suggests that 15-20 million tonne crop loss would be seen this year. The supply of vegetables and fruits will also be adversely impacted.

The Ranchi district administration in Jharkhand on Monday rescheduled classes from 6 am to 10.30 am in government and private schools in view of the summer heat, officials said.

In the interest of the health of school students, the timing has been revised, which will be in effect till further order,” Ranchi Deputy Commissioner Chhavi Ranjan said in an official release.

On April 13, the Jharkhand school education and literacy department revised the school timings from 6 am to 12 noon.

Earlier, many districts had cut short the duration of class hours because of the temperature rise.

On April 29, the Hazaribag and Deoghar administrations revised the school timings from 6 am to 10.30 am in their respective districts.

Meanwhile, light to moderate rainfall in parts of Jharkhand since Saturday has provided some relief from the blistering heatwave conditions.

The maximum temperature dropped by 4 to 5 degrees Celsius in the past two days, the weather department officials said.

The maximum temperature in Jammu marked a dip on Monday as the weather office predicted an end to three-day heat wave in the region due to passage of a western disturbance.

Jammu city recorded a high of 38.7 degrees Celsius against the previous day's 40.4 degrees, while the night temperature increased by over six degrees to settle at 29.4 degrees, a spokesperson of the meteorological department said.

Katra, the base camp for the pilgrims visiting Mata Vaishno Devi shrine in Reasi district, recorded a maximum of 35.4 degrees C and a minimum of 25.6 degrees C.

The spokesperson said most parts of Jammu region are reeling under heat wave since April 30.

“The heat wave will abate from May 3 onwards due to passage of a western disturbance which may cause intermittent light to moderate rain or thunderstorm during the next three days beginning Tuesday evening,” he said.

The MeT spokesperson said the thunderstorm will be accompanied by hailstorm and gusty winds. (PTI)

Delhi recorded a maximum temperature of 40.8 degrees Celsius on Monday, which was two notches above normal for this time of the year.

The Safdarjung Observatory — the capital's base station — had recorded a maximum temperature of 43.5 degrees Celsius, the highest on a day in April in 12 years, for three consecutive days ending Saturday.

The mercury came down to 40.5 degrees Celsius Celsius on Sunday as easterly winds barrelled through the capital under the influence of a western disturbance.

Delhi may witness a dust storm with winds gusting up to 50 kmph on Monday night, the India Meteorological Department said.

“A western disturbance affecting northwest India has pulled the temperatures down by 3 to 4 degrees Celsius in the capital. Another western disturbance is predicted on May 4 and 5. No heatwave is likely in the city for at least two to three days,” an official said.

The mercury is likely to hover around 40 degrees Celsius in the city till May 6. (PTI)

Amid hot weather conditions prevailing in the state for the past several days, the Haryana government has decided to change timings of all schools with effect from Wednesday.

Due to intense heatwave prevalent throughout the state, it has been decided that the timings of all schools–government and private–will be from 7 am to 12 pm for Classes 1 to 12 with effect from May 4, said the order issued by the Directorate of School Education on Monday.

There had been a demand from parents that in view of the scorching heat, the school timings be revised from 8 am to 2.30 pm to 7 am to 12 pm.

For the past several days, maximum temperatures at most places in Haryana have hovered in the range of 41-45 degrees Celsius. (PTI)

Himachal Pradesh and Uttarakhand, two other mountainous states thronged by tourists seeking a retreat from the heat of the plains, have also seen power demand surge by more than a sixth because of the higher temperatures.

14:36 (IST) 2 May 2022
Heatwave Live: Action plan should be made to meet future energy demands: Adityanath

Batting for comprehensive reforms in the power sector, Uttar Pradesh Chief Minister Yogi Adityanath said on Monday that an action plan should be made keeping in view future energy needs.

The latest data from Maharashtra health department shows that 25 heat stroke deaths were reported across the state this year. This is the highest number that the state has reported in past six years

In its latest advisory to states, the IMD asked them to irrigate crops regularly at the interval of 4-5 days to avoid water stress.

According to the Central Water Commission data, the water storage level in key 140 reservoirs was 108% of the level a year ago and at 128% of the average in the last ten years

The weather office has forecast partly cloudy skies for the day with the possibility of dust and thunderstorm accompanied with gusty winds. – PTI

Starting today, all schools in Odisha will begin the classes from 6:00 am to 9:00 am. The decision has been taken due to the heatwave conditions.

The fire at north Delhi's Bhalswa landfill site that has been raging for the last six days has upended lives and livelihoods of people living in adjoining areas and left them gasping for breath. – PTI

Eye conditions like allergies and infections are quite prevalent in summers due to scorching heat and industry experts are of the view that this time of the year is crucial to take care of ocular health. – PTI

Uttar Pradesh Chief Minister Yogi Adityanath on Sunday directed officials to set up cow shelters at the block level and make arrangements to save the bovines from the heat. PTI

Heatwave conditions are expected to continue over Delhi and adjacent regions for the next three days, whereas dust storm or thunderstorms are expected in isolated places over Haryana-Chandigarh-Delhi between May 2 and May 4, an IMD bulletin said

Peak power shortage rose swiftly this week from single digit of 5.24 GW on Monday to touch double digit of 10.77 GW on Thursday showing affects of various factors like low coal stocks at generation plants, heatwave and other issues on deepening electricity crisis. – PTI

The minimum temperature in Delhi settled at 25.8 degrees Celsius, a notch above the season's average, on Sunday as the national capital continued to reel under heatwave conditions, the India Meteorological Department said. – PTI