Even as notification for the biennial polls to Rajya Sabha is set to be issued tomorrow, Telugu Desam Party is yet to receive any proposal for a seat in Andhra Pradesh from its ally, BJP. 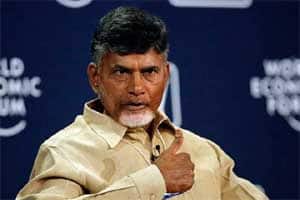 Even as notification for the biennial polls to Rajya Sabha is set to be issued tomorrow, Telugu Desam Party is yet to receive any proposal for a seat in Andhra Pradesh from its ally, BJP.

BJP’s Nirmala Sitharaman, Union Minister of State for Commerce, is currently a member of Rajya Sabha from AP and will retire on June 21.

“We haven’t received any proposal from them,” TDP supremo and Chief Minister N Chandrababu Naidu told PTI here today, when asked if one of the four seats falling vacant would be allotted to the BJP.

“We will take a decision when a proposal comes,” he said.

The TDP has adequate strength in the 176-member AP Assembly to win three seats.

While one seat is reserved for Union Minister of State for Science and Technology Y Satyanarayana Chowdary, who will also retire on June 21, two other nominees have to be chosen.

In 2014, the TDP had fielded Nirmala on the vacancy caused by the death of then MP N Janardhan Reddy.

But, of late there have been differences between the BJP and TDP over issues like the special category status to the state and also grant of funds under various heads.

Interestingly, the TDP initially wanted to give one Rajya Sabha seat to Union Urban Development Minister M Venkaiah Naidu as a ‘Telugu man’ championing the state’s cause at the Centre.

But Venkaiah himself did not like to take offer and left the decision of his candidature to the BJP. Now that his re-nomination from Karnataka has been confirmed, the TDP may have to give the seat to Nirmala.

TDP sources indicated that there would be “no voluntary allocation” of seat to the BJP in the prevailing political atmosphere.
“We will consider the issue if a formal request comes from them,” a top TDP leader maintained.

“I have no idea about this as the state committee has no say. It is up to our central leadership to decide whether or not to request for a seat,” he said.

Chandrababu is visiting Guwahati tomorrow for the swearing-in ceremony of Sarbananda Sonowal as Assam Chief Minister.

Besides Sonowal, BJP chief Amit Shah personally invited Chandrababu for the ceremony following which the AP Chief Minister rescheduled the district Collectors’ conference by a day to make it to Guwahati.

TDP sources said the Rajya Sabha seat issue might come up for discussion when Shah and Chandrababu meet in Assam.