Dushyant Chautala: How 31-year-old leader has upset the plan of both BJP and Congress in Haryana

Dushyant Chautala’s Jannayak Janta Party has emerged as the kingmaker in hung Haryana assembly by upsetting the plans of both the BJP and Congress. 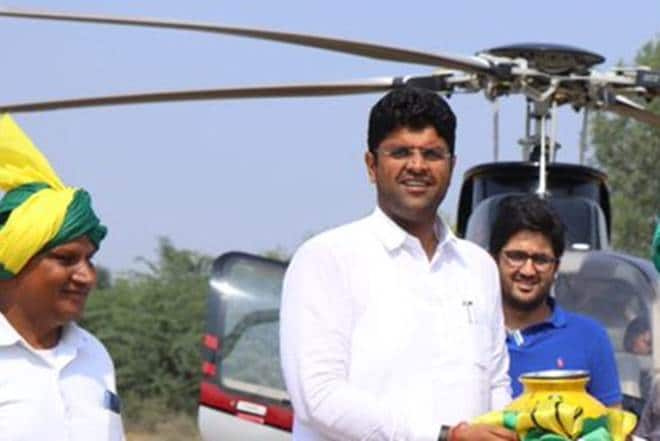 Haryana Assembly Election 2019:  The emergence of Dushyant Chautala in Haryana’s politics has upset the equations of both the BJP and Congress as his victory on 10 seats weakened both the parties. His party Jannayak Janata Party’s victory on 10 of total 90 assembly seats foiled the BJP’s strategy to ride on Prime Minister Narendra Modi’s popularity and win a second term on its own. The party also tried to capitalise on Prime Minister Narendra Modi’s bold move to scrap the special status of Jammu & Kashmir under Article 370 of the Constitution. A muscular policy against Pakistan sponsored and Kashmir decision was supposed to help the BJP retain power in a state that sends a large number of recruits to the Indian military and paramilitary forces. However, the JJP snatched six seats from the BJP, reducing it to just 40 seats, exactly six seats less than a clear majority in 90 members Haryana assembly.

Dushyant Chautala’s entry also upset the former chief minister and Congress leader Bhupinder Singh Hooda’s strategy to capitalise on the anti-incumbency sentiments against the chief minister Manohar Lal Khattar as JJP won four seats, two from BJP and two from INLD, that were held by the Congress in 2009 elections but it lost to them to BJP and INLD in 2014. The Congress was hoping to win back these seats due to anti-incumbency against the Khattar government and weak position of Indian National Lok Dal but Dushyant Chautala upset the Congress strategy in four seats.

Who is Dushyant Chautala

Dushyant was born on April 3, 1988 to Om Prakash Chautala’s elder son Ajay Singh Chautala and his wife Naina Chautala. He got his early schooling from Hisar and then from the prestigious Lawrence school in Sanawar, Himachal Pradesh. Later he completed his B. Sc. from California University in the US and LLM from National Law University.

Dushyant Chautala debuted in electoral politics in 2014 when he won 2014 Lok Sabha election from Hisar Lok Sabha seat on INLD ticket, a party founded by his great grandfather Devi Lal.

ALSO READ: Priyanka Gandhi can energise the Congress in UP but electoral gains are a far cry

Dushyant Chautala formed JJP in December 2018 after he and his father and younger brother were expelled from the Indian National Lok Dal. His party contested the first election from Jind Vidhan Sabha seat in the by-election. Though the new party could not win the seat and lost to the BJP candidate Krishan Lal Middha but it secured the second-highest vote.

The big moment for Dushyant Chautala came in 2019 assembly elections. Of the total 10 seats won by the 11 month old party, it snatched six Vidhan Sabha seats – Shahbad, Guhla, Uchana Kalan, Tohana, Narnaund and Badhra – from the ruling Bhartiya Janata Party, single-handedly causing a direct loss of six seats to the incumbent BJP that has upset the party’s plan to storm back to power in the state with a majority of its own. The BJP needed exactly six seats to have a clear majority in Haryana assembly but emergence of the Chautala family scion cost the saffron party dearly.

In addition to this, the fledgeling party caused a direct loss to Indian National Lokdal (INLD) headed by his grandfather Om Prakash Chautala by snatching four seats from the INLD.

JJP’s gain: A setback for the Congress

A resurgent Congress under the leadership of Bhupinder Singh Hooda was hoping to cash in on the resentment among the Jat community against the chief minister-ship of Manohar Lal Khattar. Though the party surprised political observers by winning 31 seats, a gain of 16 seats over its previous tally of 2014. However, 4 out of 10 seats won by the JJP in this election are those that were won by the Congress in 2009 assembly elections.

Former chief minister Bhupinder Singh Hooda was hoping to cash in on anti-incumbency sentiment against Khattar government on Tohana and Shabad Vidhan Sabha seats, the Congress party’s Jat face was also hoping to cash in on the weak position of INLD in Uklana and Barwala assembly seats. All these four seats were won by the Congress in 2009 but the party lost two seats Tohana and Shahbad to the BJP in 2014 and two seats Uklana and Barwala to INLD. However, the entry of JJP led by Dushyant Chautala deprived a resurgent Congress of these four seats.