Harish Rawat asks PM Narendra Modi: Where is my Budget?

Noting it was time to rise above political considerations and show statesmanship, Harish Rawat said if BJP co-operates he is ready to accept a commonly agreed budget document for the state. 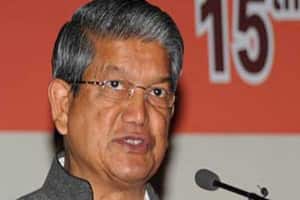 Harish Rawat said that he is assured that the Centre will take take note and act upon the issue. (Source: PTI)

Calling himself a deeply concerned Chief Minister of a state which has suffered due to prolonged political uncertainty, Harish Rawat today sought Centre’s cooperation in development and demanded clearance to the Uttarakhand budget passed by the state Assembly before his government was dismissed.

“This is what I ask from every forum these days,” Rawat said as he translated the words into Hindi for the reporters at a press conference.

He said if the issue is not resolved he would take it to the people’s court, indicating the question to the Prime Minister could become the party’s campaign punch line for the state Assembly elections due early next year.

“I should not perhaps be expecting help from BJP which is in power at the Centre at a time when elections are just six-seven months away. But I still seek the BJP’s and the Centre’s co-operation in the development of the state as I am an extremely concerned Chief Minister today,” he said.

He said the “unsavoury incidents” that took place after March 18 should be forgotten and both Congress and BJP should work in the larger interest of the people so that whichever government takes over after the Assembly polls does not suffer the kind of resource crunch present dispensation is facing.

Noting it was time to rise above political considerations and show statesmanship, he said if BJP co-operates he is ready to accept a commonly agreed budget document for the state.

“The economic uncertainty in Uttarakhand must come to an end or else our growth will stop. Our BJP friends must come forward in the interest of the people of the state. In a federal set up, the Centre and state are partners in the development process,” Rawat said.

It was in fact a reiteration of the demand by the Chief Minister who had sought Centre’s assent to the state’s own budget at a press conference here last week too.

He had said development goals set for the year could not be achieved without it.

An intense political drama was witnessed in the Assembly on March 18 when it was about to pass the state’s budget. Nine Congress MLAs had rushed into the Well of the House along with BJP members to demand a division of votes on the appropriation bill, a collective legislation on the budget.

The Speaker did not allow a division of votes on the legislation and subsequently announced it passed by voice vote.