One and a half hours of heavy rains brought Gurugram to its knees as drain breaches flooded the roads preventing any movement. 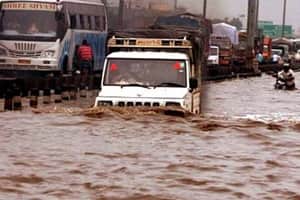 People were stuck for hours on an end with no where to go as heavy water lodging created a complte blockage. (PTI)

One and a half hours of heavy rains brought Gurugram to its knees as drain breaches flooded the roads preventing any movement. People were stuck for hours on an end with no where to go as heavy water lodging created a complte blockage. Oblivious of the danger of covered ditches, fell into them but were saved by help from other onlookers. People stuck at various spots lamented that no official, especially from the disaster management office, were available for the rescue. They said that they had been left at their own fate.

Now such incidents happen, every now and then and it is quite understandable after days of rains but a couple of hours turning a city calling itslef the Cyber Hub, into a pool of mess is raises questions. The city has had a rampant development in terms of buildings, roads, offices, and according to ForbesIndia in 2012, Gurugram has the highest number of professionals per square inch in the country. Gurugram practically is the domicile for every big name in the corporate world. Its buildings are designed by some of the world’s best architects. It has 20 outlets at least for luxury cars like BMW, Audi and Volkswagen. Malls that stock practically every international brand dot the landscape.

So why is it that a few hours of rains turns into floods and stops lives for hours. The answer is simple. For years now, Gurugram, formerly Gurgaon has been primarily owned by the private sector that has become greedier with time, changing governments avoiding responsibilities and landed gentry. When such a luxurious lifestyle was being ‘developed’, no one thought about where the water for them would come from, or where the waste generated by the industries would go. Now these problems exist and and evidently have been causing serious problems but the answers are no where to be found.

The Municipal corporation of Gurugram is filled with complaints about blocked pipes, leaky drains, sometimes even blasted and yet no actions seem to have been taken. The unplanned creation of huge buildings to support the industries and the people who work in them have blocked the natural pathways for rain water to find ways into a waterbody. The drains are clogged, half the time making them face immense pressure the moment heavy rains strike.

The Badshahpur drain, which carries stormwater, breached yesterday, leading to several feet of waterlogging in the area. Over four feet deep water was witnessed blocked near the expressway.

The question that needs to be asked is whether the government or the municipal corporation could have done anything about it or they never saw this coming; which is even worse, considering the rampant construction, mismangaement in the disposal of waste and blocked drains should have been a dead give away.