Gurudas Kamat’s resignation not accepted, efforts on to convince him: P.C.Chacko

Senior Congress leader P.C. Chacko on Wednesday said Congress President Sonia Gandhi has not taken any decision on Gurudas Kamat’s resignation and efforts were being made to convince him to reconsider his decision. 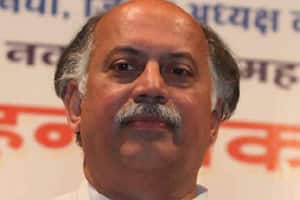 Kamat further clarified that there were no differences between him and Narayan Rane. (IE)

Senior Congress leader P.C. Chacko on Wednesday said Congress President Sonia Gandhi has not taken any
decision on Gurudas Kamat’s resignation and efforts were being made to convince him to reconsider his decision.

Former union minister and five-time MP from Mumbai Gurudas Kamat on Monday announced he was quitting the party and the political arena.

“As far as I know, Congress President (Sonia Gandhi) has not taken any decision on Kamat’s resignation. Some responsible leaders will convey him to reconsider the decision. But, if he is persistent on his decision, then the resignation will be accepted.That is the usual practice in the party,” Chacko, who is also a senior party spokesperson, told IANS.

“He has only resigned from the post he was holding and not from the party.

As far as Gurudas ji’s resignation is concerned, it has been purely on personal grounds. He has not attributed it to any motive,”he added.

Meanwhile, Congress spokesperson Ajoy Kumar said: “Mr. Kamat is very important and senior member of the Congress party. His contribution to the party has been immense. He has lot to contribute and he continues
to remain a part of the Congress. His further role in the party will be decided after a discussion with him by the party leadership.”

Chacko also played down the differences in the party leadership at the state level.

“Differences among leaders are there in many states, but it is not a new thing. They are highlighting it now because we have lost in few states. But the party has not weakened in the states,” said Chacko.

He also indicated that there would be some changes in the party leadership after the Rajya Sabha elections.