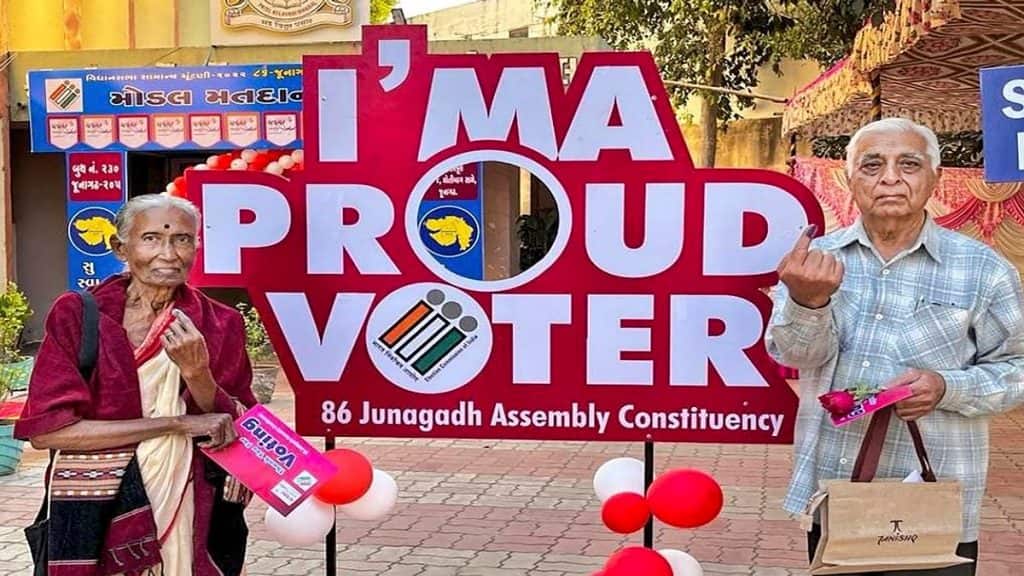 Gujarat Election Voting Live: An elderly couple after casting their vote at a polling station during the 1st phase of Guajarat Assembly polls, in Junagadh today. (PTI Photo)

Gujarat Assembly Election 2022 Phase-1 Voting Live Updates: Voting ended for the first phase of the Gujarat elections for 89 Assembly seats at 5 PM on Thursday. The first phase of polling, in which 788 candidates are in fray, was held across 19 districts of Saurashtra-Kutch and southern regions. The final voting figures for phase 1 stood at 59.2 per cent, the Election Commission said. Barring a few incidents of EVM malfunctioning, the first phase of the Gujarat 2022 elections was largely peaceful. Polling began on a dull note with only 4.92 per cent of the electorate casting their ballot till 9 AM, but slowly picked pace and improved to 19.13 per cent at 11 AM, according to the EC data.

Also Read: Gujarat Election Phase 1: Key seats and candidates to watch out for this election

Elections to the 182-member Gujarat Assembly are being held in two phases and the counting of votes will be taken up on December 8. The state goes to polls for the second phase of Gujarat elections on December 5. Even as the first phase of elections was underway, political parties indulged in campaigning for the second phase of elections. Prime Minister Narendra Modi addressed several rallies in Gujarat today, and Aam Aadmi Party leaders, including Delhi Chief Minister Arvind Kejriwal, Punjab CM Bhagwant Mann held a roadshow in Ahmedabad.

An average 59.24 per cent voter turn-out was recorded as of 5 pm on Thursday across 89 Assembly seats in the first phase of Gujarat elections, election officials said. While voting began at 8 in the morning and ended at 5 pm, the final turn-out would be higher as the process continued at the polling stations where voters had arrived before 5 pm and were standing in queues. The fate of 788 candidates will be decided in the first phase. – PTI

Voting ended for the first phase of Gujarat elections at 5 pm on Thursday.

Gujarat records 48.48 per cent voter turnout till 3 pm in the first phase of the ongoing Assembly elections. Tapi district has recorded the highest voter turnout at 63.98 per cent. followed by Narmada at 63.95 per cent.

According to the Election Commission, 48.48% voter turnout recorded till 3 pm in the first phase of Gujarat Elections 2022.

He alleged that he was travelling from Pratapnagar to Vandervela village with his supporters when he was attacked. Further, Patel alleged that the miscreants had pelted stones and also attempted to vandalise his car. He sustained injuries on his head and was admitted to a hospital.

Prime Minister Narendra Modi greets people in Kalol to campaign for the second phase of elections.

Congress spokesperson Alok Sharma said that the party has filed a second complaint about electronic channels which have been showing visual bytes of the BJP, so as to influence voters. He said that it is against the EC guidelines to air opinion or exit polls.

Sharma further said that no programmes should be aired which will even remotely sound like an opinion poll.

Congress submits a complaint to Election Commission saying that EVMs were not working in at least 50 polling booths, which were located mostly in the Saurashtra region.

“We have submitted a written complaint on the non-functioning of EVMs and a lot of time is being taken to replace them. We have submitted a list of places where the EVMs are not working. There are around 50 polling booths where this problem has arisen and many of them are in Saurashtra, which includes Jamnagar and Rajkot. These should be rectified quickly so that maximum polling can happen,” said Alok Sharma, national spokesperson for the Congress, as quoted by The Indian Express.

Union minister Darshana Jardosh casts her vote. After casting vote, Jardosh exuded confidence over BJP's win in the elections, and said that the saffron party will come with an absolute majority.

While addressing a poll rally in Gujarat's Panchmahal on Thursday, Prime Minister Narendra Modi said there is a competition among Congress leaders as to who will use the most abusive words against him. He was referring to Congress president Mallikarjun Kharge's recent 'Ravan' jibe at him.

Before Kharge, another Congress leader had said the party will show PM Modi his 'aukat' (place), the PM said, apparently referring to Madhusudan Mistry's remark.

Kharge on Monday night addressed a rally in Behrampura area of Ahmedabad city where he said the prime minister asks people to vote “looking at his face” in all elections. “Are you 100-headed like Ravan,” he had said.

“People are voting very enthusiastically. In Rajkot district, 26 per cent polling has been recorded till 12 noon. No untoward incident has been reported so far. We are monitoring sensitive polling stations through webcasting,” Rajkot Collector Arun Mahesh told ANI.

Prafulbhai More, a man whose wedding is scheduled for today, casts his vote in Tapi, ANI reported. More said, “I urge everyone to vote, you shouldn't waste it. My wedding was scheduled for the morning but I rescheduled it for the evening, we've to go to Maharashtra for it.”

An average 19.13 per cent voter turnout was recorded till 11 AM on Thursday, as first phase of election is underway, according to news agency PTI. Tapi district recorded the highest turnout 26.47 per cent, which was followed by Dang – 24.99 per cent. Meanwhile, Devbhumi Dwarka district recorded the lowest 15.86 per cent turnout so far. In Surat district, 17.92 per cent polling was recorded, while in Amreli it was 19 per cent.

Gujarat Chief Minister Bhupendra Patel held a roadshow in Mehsana district which will go on polls in the second phase of elections. The roadshow is being held as polling is underway in the state for the first phase of elections across 89 Assembly constituencies.

Rajkot royal family members Mandhatasinh Jadeja, Kadambaridevi Jadeja and Mridulakumari Jadeja arrive in a vintage car to cast votes at a polling station during the first phase of elections, in Rajkot. (Photo by PTI)

AAP candidate Alpesh Kathiriya, who is contesting from the Varachha Road seat, was earlier with Akhil Bharatiya Vidyarthi Parishad (ABVP), the student wing of Rashtriya Swayamsevak Sangh (RSS). He started his political stint with the Congress before jumping into the BJP.

AAP candidate Alpesh Kathiriya casts his vote in Surat. The prominent Patidar leader, who was part of the 2015 Patidar agitation, had joined the AAP in October in the presence of Arvind Kejriwal in Gariadhar city of Bhavnagar district.

Union Home minister Amit Shah holds a roadshow in Sanand in Ahmedabad to campaign for the second phase of elections.

A total of 18.95 per cent voter turnout was recorded till 11 am in the first phase of elections.

Ravindra Jadeja said, “I appeal to the people to vote in large numbers.”

According to a PTI report, Surat district recorded a turnout of about 4%, while Dang and Tapi, two tribal-dominated districts in the south region recorded brisk voting 7.76% and 7.25%, respectively.

Porbandar recorded the lowest turnout of 3.92% so far, while Kutch district reported 5% polling, the EC said in its latest update.

Mumtaz Patel, late senior Congress leader Ahmed Patel's daughter, said, “We are advocating a change. Chief Ministers were changed, so they can feel anti-incumbency. There is a neck-to-neck fight here (Ankleshwar).” The voter turnout in the first phase of the assembly polls was 4.92% till 9 am.

Prime Minister Narendra Modi will on Thursday lead a more than 30-km-long roadshow in Ahmedabad city, where polling will be held in the second phase of the Gujarat Assembly elections.

Voting is underway on Thursday for the first phase of elections in 89 seats of Saurashtra and south Gujarat regions, while the polling in the remaining 93 seats including 16 of Ahmedabad city will take place on December 5.

Modi's mega roadshow will start from Naroda Gam area on the eastern side of Ahmedabad in the afternoon and end at the IOC circle in Chandkheda area on the city's western side in the evening, the BJP said in a release.

The roadshow will pass through various parts of the city including Hirawadi, Hatkeshwar, Maninagar, Danilimda, Jivraj Park, Ghatlodia, Naranpura and Sabarmati. It will cover 13 seats of Ahmedabad city as well as Gandhinagar-South, the release further stated. – PTI

The AAP has anchored its campaign around a host of “guarantees” such as free electricity up to 300 units a month, unemployment allowance and government jobs.

Congress promised a cooking gas cylinder for Rs 400, free electricity and English medium schools, among others.

The BJP seems firm on the ground with its development and Hindutva agenda, the promise of 20 lakh jobs, setting up of an 'anti-radicalisation' cell, and implementation of the Uniform Civil Code in the state.

Gujarat BJP chief CR Paatil casts his vote for at a polling station in Surat.

There is an appeal to all the brothers and sisters of Gujarat, vote…for employment, cheap gas cylinder, for loan waiver of farmers For the progressive future of Gujarat, vote in large numbers and make this festival of democracy a success, says Rahul Gandhi.

Congress MLA Paresh Dhanani leaves his residence, to cast his vote, with a gas cylinder on a bicycle to highlight soaring prices issue.

“I appeal to people to cast their votes. Voting is necessary to safeguard democracy. I am confident that BJP is going to form the Govt in Gujarat for the seventh time. People have love and respect for PM Modi, they won't go anywhere else,” says Vijay Rupani. (ANI)