Govt to reach out to NRIs for fund raising flagship schemes

Sushma Swaraj is the Chairperson of IDF-OI, set-up by the Ministry of Overseas Indian Affairs to facilitate philanthropic contributions by overseas Indians to social and development projects in India. 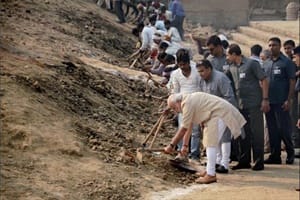 Non-resident Indians, especially those living in the UK and Qatar, will be reached out to by a government-supported trust to raise funds for ‘Swachh Bharat’ and ‘Clean Ganga’ projects.

This was discussed during the fifth meeting of the board of trustees of IDF-OI, chaired by Minister for Overseas Indian Affairs Sushma Swaraj, here yesterday.

The board reviewed the progress made by IDF-OI on the revised mandate given in its last meeting on May 23, 2015 i.e. to promote among the overseas Indians the flagship programmes of Government of India — Swachh Bharat Mission and National Mission for Clean Ganga; projects identified by the state governments and donor advised projects.

“The board directed that IDF-OI may enhance its outreach among overseas Indians, through visits to the UK and Qatar.

“In the forthcoming Pravasi Bhartiya Divas conference 2016, there will be a focus group on facilitating contributions by overseas Indians through IDF-OI,” a press release issued today by the government said.

Sushma Swaraj is the Chairperson of IDF-OI, set-up by the Ministry of Overseas Indian Affairs to facilitate philanthropic contributions by overseas Indians to social and development projects in India.

During the meeting, IDF-OI informed the board that under the Swachh Bharat Mission, overseas Indians were invited to fund construction of household, community and public toilets in both urban and rural areas.

“IDF has also invited contributions for the National Mission for Clean Ganga. In response to IDF-OI’s request, several state governments have identified social and development projects in their respective states in areas such as sanitation, education, drinking water, women’s empowerment etc which are available for funding through IDF-OI,” it said.

IDF-OI also conducted an outreach in UAE in October 2015 as a result of which many overseas Indians made commitments to funding projects especially those under the Swachh Bharat Mission.

The board meeting was attended by prominent Indians and NRIs including Yusuff Ali, Subhash Jindal, B K Agnihotri,Ashok Chowgule, Ritu Beri and Bindeshwar Pathak.