Government has no role in CBI examination of Manmohan Singh: Venkaiah Naidu 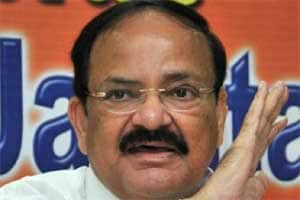 The government today refuted claims that the CBI examination of former Prime Minister Manmohan Singh in connection with the coal block allocation case was a “vindictive” act on its part.

“(The) government has no role at all… Congress is speaking in two voices. While one person says (the examination) is vindictive, another spokesperson says it is part of a legal process,” Parliamentary Affairs Minister M Venkaiah Naidu said here.

“They (the Congress leaders) should sit down and decide on what to speak… It is the hobby of Congress to go into disinformation campaign without knowing what they are talking,” he said.

Naidu was asked to comment on reported remarks of some Congress leaders that the questioning of Singh was a vindictive act on part of the Narendra Modi government.

One Congress leader had, however, reportedly said that there was no need to politicise the case as it was part of a legal process.

Naidu said a special CBI court had also questioned the CBI for not examining Singh in the case.

A team of CBI officials had examined the former Prime Minister at his residence three days ago ahead of the filing of status report before a special CBI court by January 27.

Singh’s examination was in connection with a coal scam case relating to allocation of Talabira II block to Hindalco when he was also holding the portfolio of coal, and in pursuance of the court’s December 16 order.