The Congress today accused the government of adopting a “fascist approach and dictatorial agenda” in stifling the opposition’s voice by not allowing a discussion on crucial issues like lynchings and questioned the prime minister’s silence on the issue. 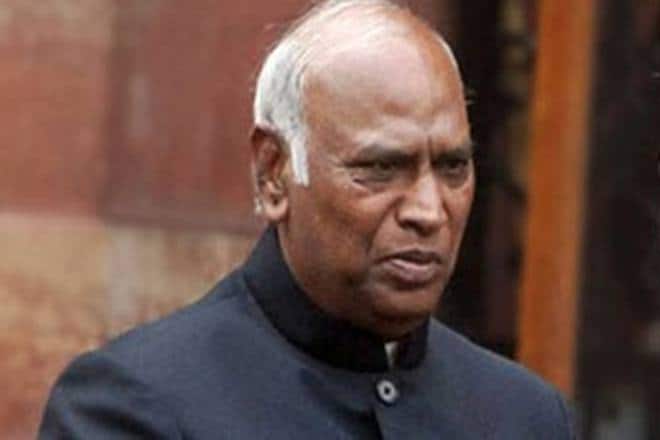 "The BJP government has adopted a 'fascist approach' and 'dictatorial agenda' in preventing the Lok Sabha from debating the issues facing the nation," Kharge told reporters. (Image Source: Reuters)

The Congress today accused the government of adopting a “fascist approach and dictatorial agenda” in stifling the opposition’s voice by not allowing a discussion on crucial issues like lynchings and questioned the prime minister’s silence on the issue. Leader of Congress in Lok Sabha Mallikarjun Kharge asked why the Congress and other opposition parties were denied the right to raise issues of national concern and why the prime minister and the BJP are avoiding a debate on lynchings.”The BJP government has adopted a ‘fascist approach’ and ‘dictatorial agenda’ in preventing the Lok Sabha from debating the issues facing the nation,” Kharge told reporters.

He accused the government of displaying an autocratic attitude by not discussing issues in the House and suspending those who demand a discussion on important issues, saying “we don’t agree with such an attitude”. “The prime minister has adopted silence in Parliament, even though he has spoken outside in public rallies. He represents the people and is leader of the House, he must inform the House. “Does he want to work in a democracy, as the leader always gives a statement in the House on important issues and when there is a crisis. He comes for 5-10 minutes and goes. This is like ending democracy and the Constitution,” he said.

Kharge also alleged that the Speaker took the decision of suspending six Congress members demanding a discussion on lynchings “only after the government exerted pressure”. “The Speaker takes such a decision after the government exerts pressure. We respect the Speaker and there is no charge of partiality,” he said, when asked if he meant that the Speaker was acting partial. The six suspended MPs of Congress were present alongside him. Asked if the Congress would boycott the House proceedings as it had done earlier, Kharge said, “We will fight and persuade. In a democracy, persuasion is important”.

“Why are Prime Minister Narendra Modi and the ruling BJP government running away from a debate, discussion and responsibility of the Parliament? “Isn’t the dictatorial and fascist approach of the BJP government an anathema to the functioning of our democracy?” he asked. Kharge also condemned and questioned the adoption of different yardsticks by suspending the opposition members and letting off BJP member Anurag Thakur for filming the Lok Sabha proceedings with a mere warning.

“Why are two yardsticks being applied – one for the BJP member Anurag Thakur and another for the six suspended Congress members?” he asked as part of four questions from the government. “Prime Minister Narendra Modi has once again shied away from the debate in Lok Sabha, escaping accountability and answers that people of India seek in the light of all pervading volatility. PM choses to speak in captive audiences and BJP rallies but misses every opportunity for a meaningful debate in the House,” Kharge said.