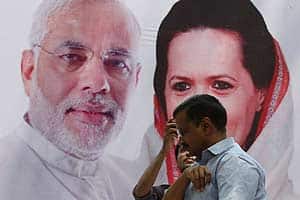 Kejriwal’s comments came a day after the Aam Aadmi Party chief dared BJP to arrest Congress President Sonia Gandhi during a rally in Jantar Mantar here in connection with the AgustaWestland chopper deal.

“Sources – Gandhi family has some secrets of Modi ji. That’s why Modi ji will never be able to act against any member of Gandhi family,” Kejriwal tweeted.

Also Read
iPhone 12 Pro unboxed: Big things, small packages and how to pick the best iPhone for you
Retail, fintech startups dominated funding landscape between 2016-18; raised this much capital
How Amazon is strengthening its data storage capacity to leverage data localisation
Wipro changes logo for the first time after 1998, looks to win clients with new identity

AAP workers had also marched towards the PM’s Race Course Road residence yesterday alleging a BJP-Congress nexus in corruption, in which over 600 supporters, including 24 MLAs and several senior party leaders, were detained.

Kejriwal had said that Congress and BJP possessed “secrets” about each other. “UPA was in power for 10 years and during those years they have kept secrets of Modi’s all scams. Modi knows that if Gandhi is arrested, (Robert) Vadra is arrested, his secrets will also be in the public domain,” he had said.