From fear to understanding – what can we learn from Aryabhata

Though ancient cultures across the world feared them, astronomers over the last 2000 years have worked hard to understand them scientifically. 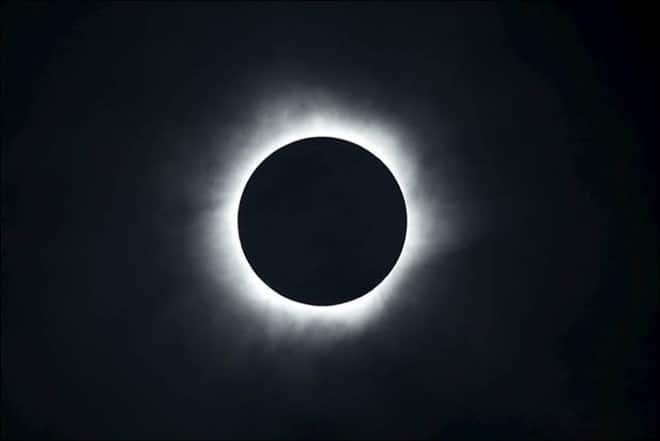 Solar and lunar eclipses are awe-inspiring events that we are fortunate to witness. (Reuters)

This article is in response to two other articles (here and here) that appeared in the Financial Express on the lunar eclipse that occurred on 7 Aug this year.

Summary: Solar and lunar eclipses are awe-inspiring events that we are fortunate to witness. Though ancient cultures across the world feared them, astronomers over the last 2000 years have worked hard to understand them scientifically. In the land of Aryabhata, a pioneer in this field, it behooves us not to believe in false scare-mongering, but share in this magnificent spectacle.

There are very few natural events that are as awe-inspiring and at the same time, possibly frightening, as solar and lunar eclipses. In ancient times, the sudden disappearance of the Sun and the Moon for a brief period must have been terrifying. Hence, in cultures like the Chinese and the Norse, people used to bang pots and drums to drive away whatever it was that was causing the eclipse. We know that a solar eclipse is caused when the shadow of the Moon falls on the earth, and a lunar eclipse is caused when the shadow of the earth falls on the Moon. The orbit of the Moon around the earth and the orbit of the earth around the Sun are tilted at about 5 degrees. This is why we do not get a solar eclipse every new Moon or a lunar eclipse every full Moon.

Of course, the explanation for eclipses was not known in very ancient times, when most cultures thought that some demon or animal was trying to eat the eclipsed object. For example, it was a dragon for Chinese, giant frog for Vietnamese, dogs for Koreans, wolves for Norse, giant bird for Hungarians, giant bear for Buryats in Siberia, jaguar for Tobas of South America, giant snake for Mayans, bear for Pomo native americans, and Rahu and Ketu for us Indians. Most civilisations thought that eclipses were bad omens. Hence, there was a tremendous pressure on ancient astronomers to predict them accurately.

The earliest mention of eclipses were in oracle bones 3000 years ago in China. The first recorded total solar eclipse was on 15 June 763 B.C. in Assyria, though eclipses have been talked about since 2300 B.C. in Babylon. Ironically, it was their fear that made these cultures keep meticulous records of every eclipse, which led astronomers to discover a pattern in their occurrences, called Saros cycles. These patterns were used to predict eclipses in the last few centuries B.C. The first correct explanation of eclipses was given by the Greek Anaxagorus in 5 th century B.C. With this new understanding, based on the motion of the Sun and the Moon, astronomers like Hipparchus could now predict eclipses. Like in all branches of science, progress occurred by an exchange of ideas across cultures.

In India too, eclipses were seen as something to be feared, and as bad omens. The earliest mention is in the Rg Veda which states that the asura Svarbhanu pierces the Sun with darkness, who is then rescued by the sage Atri. At a later time, Svarbhanu is identified with Rahu and in the famous story of the churning of nectar, Svarbhanu is beheaded, and the bodyless head, Rahu, causes the eclipses. Ketu was earlier used to denote comets and meteors and it is only in much later texts that Ketu is identified with the head-less body of Svarbhanu. Astronomy knowledge itself grew during this period, with the Vedanga Jyotisha and other texts. However, not many records exist from this time, until the last centuries B.C.when there was extensive interaction between Indian and Greek astronomy, when concepts of the zodiac and astrology are believed to have entered India. Indian astronomy assimilated this new knowledge and vastly improved on them, and in turn, influenced the Chinese and the Arabs.

Indian astronomy was revolutionised with the arrival of Aryabhata. Born in 476 C.E. in present day Patna, during the Gupta period, he shook the world of astronomy and maths. In the fourth part of his only surviving work, the Aryabhatiya, he made some astonishing claims for its day. He states that the earth is spherical in shape and rotates about its axis once a day. Notably, Aryabhata dispenses with Rahu and Ketu, explains eclipses as due to shadows of the earth and the Moon, and describes how to calculate their timing and their size. He was not afraid of refuting traditional wisdom if it did not agree with reality. However, Aryabhata was ridiculed by other astronomers for his claims which went against prevalent orthodoxy. Even Varahamihira (born 505 C.E.) and Brahmagupta (born 598 C.E.) criticised his claim that the earth rotated once a day around its axis. Even though every astronomer since his time followed and expanded on the work of Aryabhata, they sometimes had to subscribe to the predominant view that had started identifying Rahu and Ketu with the ascending and descending nodes in the Moon’s orbit. Lalla (720 C.E. present day Gujarat) was one of the few astronomers who refuted the Rahu/Ketu theory of eclipses. The Indian subcontinent has had a long history of astronomers who tried to understand the world through scientific means, while disregarding or even opposing prevalent myths and beliefs.

We now know that a solar eclipse happens when the Moon’s shadow falls on a region on earth. Many people believe that harmful radiation is emitted during an eclipse, which is without any basis in reality. The Sun constantly emits light and energetic particles. However, these are emitted all the time, and life has evolved on earth under these conditions over billions of years. During a solar eclipse, all of this emission is less, not more. These fears are even more unfounded for a lunar eclipse, since the reflected light from the Moon is miniscule compared to the light from the Sun. Also, the gravitational force on you due to the Moon is not much more than that due to a large hill or from a multi-storey apartment if you stand next to one. Hence even this cannot be a reason to fear solar eclipses. Believing in unfounded superstitions can be harmful. There are numerous cases of pregnant women refusing to accede to delivery during an eclipse, against the advice of their doctors. In Mominpura near Gulbarga in Karnataka, 60 children were buried neck deep in mud for 6 hours during the solar eclipse of 2009. Doctors and scientists have repeatedly stated that eclipses have no harmful effects on us. However, not everyone in India hides at home during eclipses. Peoples Science Movements like Navnirmiti had distributed 5 lakh eclipses glasses during the previous solar eclipses in India, and had arranged public viewing camps. For example, during the total solar eclipse of 2009, the government of Bihar had provided infrastructure and even food for multitudes of people who had come to Taregna to see it. The main reason why we should see eclipses is that they are one of the most beautiful sights one can witness. Now and then, the universe steps into our life with an eclipse and makes us aware not just of the sheer vastness of space, but also of how the seemingly unchanging sky is actually a place of constant motion. Let us not let these rare events go by, cowering in our houses, scared of something that we now actually understand extremely well.

Eclipses continue to be important scientifically even in modern times. The discovery of the corona (the atmosphere of the Sun), the discovery of Helium from India and the confirmation of Einstein’s theory of gravity were all done during total solar eclipses. Even today, Indian astronomers study eclipses. Astronomers at CESSI, IISER Kolkata have predicted the shape of the corona that will be seen during the 21 Aug 2017 solar eclipse, visible in the USA, and are eagerly waiting to see if their theories will be proven right. Many groups in the USA will be broadcasting this eclipse live online. The next total lunar eclipses that we can see from India will be on 31 Jan 2018 and 27 July 2018. We will also see two annular solar eclipses (when the Moon appears a bit smaller than the Sun and cannot completely cover it) on 26 Dec 2019 (southern India) and 21 June 2020 (west and north India). The next total solar eclipse will be on 20 Mar 2034, visible from J&K. Don’t miss them!

Written by Dr Niruj Ramanujam, National Centre for Radio Astrophysics (NCRA-TIFR) and Dr. T. V. Venkateswaran, Vigyan Prasar, DST. Both authors are members of the Public Outreach and Education Committee of the Astronomical Society of India