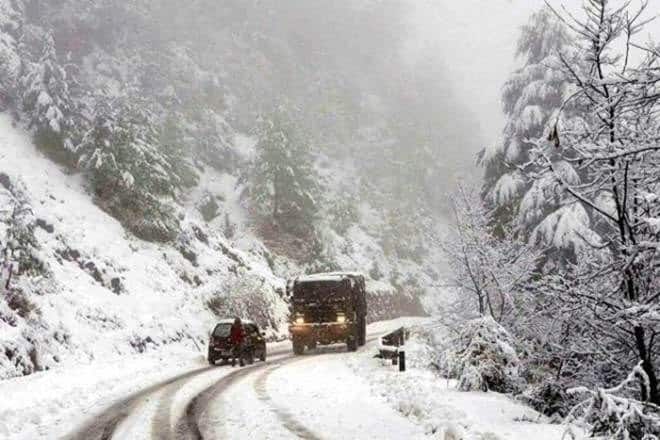 Himachal Pradesh and Uttarakhand on Tuesday received fresh snowfall after which sporadic rains aggravated cold conditions in plains and the temperature fell down due to overcast conditions, reports All India Radio. An official from Meteorological Department told IANS, “Shimla and its nearby areas have been experiencing snowfall and this was the season’s first snowfall in Shimla town.” He also informed that places near to Shimla like Kufri and Narkanda have also been experiencing snowfall, turning the tourist destinations more picturesque. Meanwhile light rains in Delhi yesterday caused the temperature to dip and cold waves continued throughout the day in National Capital Region.

According to IANS, temperature in Shimla was 2.7 degrees Celsius, after the hilly town recorded mild snowfall, while Kufri and Mashobra recorded moderate snowfall. The day’s temperature in Shimla stayed at 12.2 degrees. Lower areas of the state like Dharamsala, Palampur, Solan, Nahan, Bilaspur, Una, Hamirpur and Mandi towns received rain, bringing down the temperature considerably.The Met Office has forecast that scattered rain or snow is likely in the state till Wednesday.The snowy landscape in Shimla would stay for one-two days, an official of the Met Office said.

Yesterday, Delhi witnessed the first rainfall of the year after a dry spell of 42 days. The national capital and its surrounding areas got drizzles in the morning and the sky remained overcast throughout the day. According to private weather forecasting agency Skymet, Delhi receives an average rainfall of 19.3mm during January. This year no rain was recorded and Delhi saw the longest dry spell of 42 days. The Indian Meteorological Department said, that the days ahead are expected to be foggy with no rains. The minimum temperature in the morning was 9.4 degrees Celsius, two notches above the season’s average. Humidity stood at 84 per cent at 8.30 a.m. The maximum temperature is likely to hover around 21 degrees Celsius. However, the weather remained dry in Uttar Pradesh with shallow to moderate fog occurring at a few places in the state.

The Indian Express reported that night temperature were below normal in Varanasi, Faizabad, Allahabad, Lucknow and Bareilly. The lowest minimum temperature in the state was 3.6 degree Celsius recorded at Fursatganj.