The court also imposed a fine of Rs 50,000 on the five-time Bahujan Samaj Party (BSP) MLA, who is currently lodged at Banda jail in Uttar Pradesh. 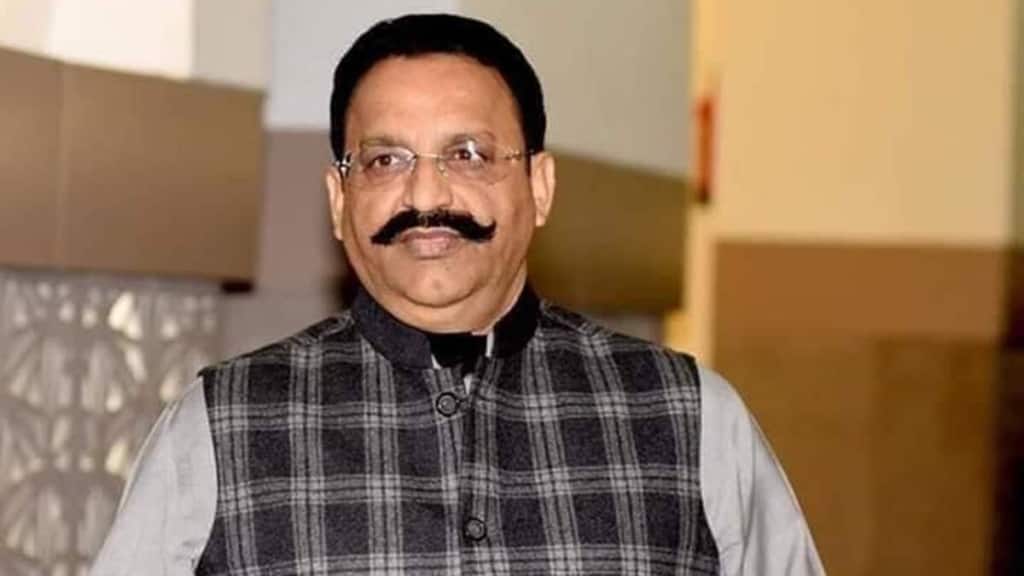 Former MLA Mukhtar Ansari was sentenced to five-year imprisonment in a 23-year-old case related to the Gangsters Act by the Lucknow Bench of the Allahabad High Court on Friday.

The case dates back to February 4, 1999, when jail superintendent RK Tiwari was killed in broad daylight in Hazratganj. Ansari was booked under the Gangster Act as a key conspirator of the murder case, along with 23 others, under sections 302 (murder) and 307 (attempt to murder) of the Indian Penal Code.

The court also imposed a fine of Rs 50,000 on the five-time Bahujan Samaj Party (BSP) MLA, who is currently lodged at Banda jail in Uttar Pradesh.

Justice D K Singh passed the order on Friday overturning the acquittal by a special MP-MLA court in 2020, saying that the court “grossly erred” in acquitting Ansari.

The prosecution presented a gang chart in the Allahabad court as evidence against the ex-BSP MLA.

“The special MP-MLA court grossly erred in acquitting Mukhtar. The gang chart was proved in the court as documentary evidence. Mukhtar is a gangster and he allegedly committed several offences, therefore, he is found guilty for offences under Section 2/3 of the Gangster Act,” the court said, as quoted by PTI.

State counsel Rao Narendra Singh said that Hazratganj SHO had lodged an FIR against him in 1999, alleging that Mukhtar and his associates committed heinous offences, including murder, extortion, kidnapping and abduction. A special court had acquitted Ansari in 2020, and a year later, the state filed an appeal against the acquittal.

Placing arguments on behalf of the state government, Additional Government Advocates UC Verma and Rao Narendra Singh said that the FIR had mentioned that the gang-members are dreaded criminals who commit organised crimes, and that no one dared to lodge an FIR against members of the gang.

Accepting arguments of the prosecution lawyers, Justice Singh said that Ansari should be punished under the Gangsters Act.

“If the prosecution proves that the person belongs to a gang and indulges himself in committing offence with object of disturbing public order or of gaining any undue temporal and pecuniary material or other advantage for himself or any other person, he may be punished under the Gangsters Act,” Singh said, as quoted by PTI.

On Wednesday, the former MLA was given a seven-year jail term in another case for threatening a jailer and pointing a pistol at him in 2003. The jail official, SK Awasthi, posted in 2003 at Lucknow district prison alleged that he was threatened for ordering a search of people who came to meet Ansari.

Earlier, in August, the Enforcement Directorate (ED) had conducted raids at multiple locations in Uttar Pradesh and Delhi as part of a money laundering investigation under the criminal sections of the Prevention of Money Laundering Act (PMLA) against the mafia-turned-politician.

He is under the ED scanner in connection with at least 49 criminal cases booked against him, including those on charges of land grabbing, murder and extortion.