Former DGMO of Indian Army from 2012 to 2014, Lt Gen Vinod Bhatia, has said that the Indian Army’s retaliation post Uri cannot be compared with those operations. 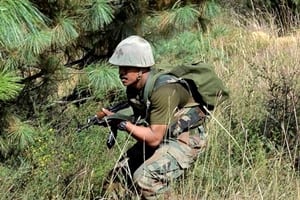 The Former DGMO said: he earlier strikes were not even strikes, they were cross-border operations done at the local level. (PTI Photo)

In effect rubbishing Congress’s claims of ‘surgical strikes’ during the UPA government’s tenure, former DGMO of Indian Army from 2012 to 2014, Lt Gen Vinod Bhatia, has said that the Indian Army’s retaliation post Uri cannot be compared with those operations. “The two can’t be compared, I am not trying to get into the politics of it, but let me tell you those are different times, different operations, planned and executed at a different level all together and this one is a totally different operation,” Lt Gen Vinod Bhatia told news channel NDTV. “In fact, these (surgical strikes) have given us the returns that we wanted and it they different ramifications – that is why there is so much political hullabaloo around it. I don’t think we should question the Army, I don’t think it is right. The DGMO of the Indian Army and the Army chief should not be questioned on it,” he said.

Days after the Indian Army announced carrying out surgical strikes across the LoC, Congress said that similar operations were done during the UPA tenure without being declared publically. Slamming the Modi government for choosing to declare that the Indian Army had destroyed terror launch pads, Congress said that surgical strikes were conducted thrice during UPA rule. Congress claimed that it did not make “loud claims” in the interest of national security. Congress spokesperson Randeep Surjewala has said, “We are proud that even in the past our forces have successfully conducted such surgical strikes on numerous occasions, particularly on September 1, 2011, July 28, 2013 and January 14, 2014, giving a befitting reply to the enemy. In its maturity, wisdom and in the interest of national security, Congress Government avoided making loud claims.”

Watch: Operations In 2013 And 2014 Not Surgical Strikes: Then DGMO Counters Congress

Putting things contextually, Lt Gen Vinod Bhatia said, “I am a soldier and I belong to the Indian Army, which is totally apolitical – dedicated, committed and professional. Now, let us put the surgical strikes in the correct contextual framework. These surgical strikes are in a different domain, they are a defining moment, where all elements of national power, that is the diplomatic, informational, military, economic, political, cultural – have synergised, and for the first time, India has given a befitting response to terrorist operations in the counter-terror domain”. “Having said that, the earlier strikes were not even strikes, they were cross-border operations done at the local level without much planning, without much thought,” he said when asked about Congress’s claims of two surgical strikes conducted at a time when he was DGMO.

Lt Gen Vinod Bhatia went on to add, “When we operate at the Line of Control, the units have four tasks; one is the task of ensuring the sanctity of the Line of Control, two is the task of ensuring the defence of the territorial integrity of our nation, three is the task of counter-infiltration and the fourth is the task of ensuring moral ascendancy over the Pakistani Army – which continues to violate the ceasefire”. “Now, it is the fourth context that these cross-border intrusions and some operations have taken place and not what has taken place now. These are surgical strikes, properly planned, well deliberated operations and they have been orchestrated extremely well, and I am a very proud soldier today, I am a very proud Indian today that we have given a response and shown our strategic restraint,” he said comparing the strikes carried out by the Indian Army a week back with earlier operations. “I think Pakistan does not do what to do, we have created a decision dilemma for them,” he added.