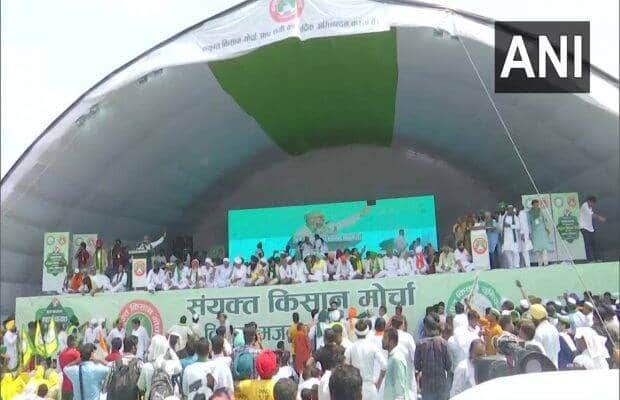 The Samyukta Kisan Morcha on Saturday formed a five-member panel for dialogue with the government on their pending demands including MSP, compensation to kin of farmers who died during the agitation against the agri laws and withdrawal of cases against the protesters.

“We will not end this agitation without a formal response on each of the issues being raised by us. We want to see all the cases foisted against farmers as well as their supporters, who were part of this movement, to be withdrawn and assurance to be made formally,” the SKM said in a statement.

Farmer leaders Balbir Singh Rajewal, Ashok Dhawle, Shiv Kumar Kakka, Gurnam Singh Chaduni and Yudhvir Singh were named the members of the committee after a meeting was held by the SKM here on Saturday.

Addressing a press conference with other SKM members at the Singhu Border protest site, Tikait said that the next meeting of the Morcha will take place on December 7 at 11 AM to decide the future course of the movement.

SKM, an umbrella body of 40 farm unions, in the statement said that farm unions have had a “bitter experience” in the past of securing oral assurances and ending their agitation only to find that the government reneges on them. “The Government of India has chosen to work informally and in a piecemeal fashion of responding to some of the issues being raised by the protesting farmers,” the SKM statement said.

Protesting farm unions have been pressing for their demands to be considered including withdrawal of cases filed against farmers during the movement, legal guarantee on MSP and compensation to kin of farmers who died during the agitation.

SKM leaders, after the meeting, said they will not move from the protest sites until cases filed against farmers are withdrawn, and demanded an assurance in writing.

Farmers from Punjab, Haryana and Uttar Pradesh under the aegis of various farmers’ unions have been protesting at the borders of the national capital since November 26 last year to demand repeal of the three farm laws.

On Monday, a bill was passed in parliament to repeal the three contentious farm laws, one of the main demands of the protesting farmers. But the stalemate continues with the protesters demanding that the government fulfil the other demands also. “The next meeting of SKM has now been fixed for December 7, with the next two days kept for the Government of India to respond to SKM and work along with the 5-member Committee to resolve this agitation to its logical conclusion,” the SKM statement said.

Shiv Kumar Kakka, farmer leader and SKM member, said that the five-member panel will be a coordinating agency between the SKM, and Centre. Kaka is a member of the newly formed panel. “It was premature on part of those who were thinking that we will call off our agitation,” he said.

Unless the MSP guarantee is ensured and cases against farmers are withdrawn, “we are not going to move from here”, Kakka said. “Once our other demands are met, then we will decide about the further course of the agitation,” he added.

The SKM meeting lasted for about three hours and was attended by farmer leaders including Tikait, Balbir Singh Rajewal, Yogendra Yadav, Darshan Pal, Ashok Dhawale among others.

Dhawale, who is also a member of the farmers’ panel, said that repeal of three farm laws is the biggest victory of all farmers of India. “The three farm laws were anti-farmer, anti-people and pro-corporate. SKM has also been demanding allotment of land to install a memorial to martyred farmers, at Singhu Border, which will be built by the Morcha,” Dhawale said during the press conference after the meeting.

Prime Minister Narendra Modi on November 19 in an address to the nation has announced the repeal of the three farm laws. On November 21, the SKM had sent a letter to the PM urging him to consider farmers’ six demands including on MSP and compensation.