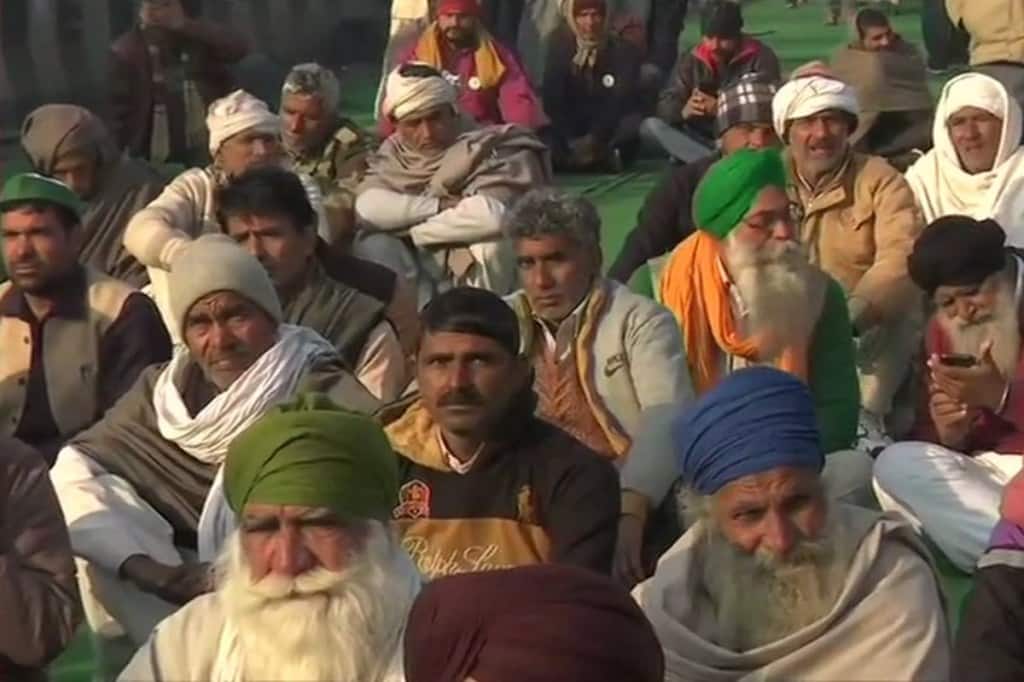 More peasants are pouring in at the protest site from neighbouring areas like Meerut, Ghaziabad and Muzaffarnagar.

Kisan Andolan 2020, Farmers Protest in Delhi Updates: Raising concerns over the three new farm laws, NCP President Sharad Pawar today said the legislation will adversely affect the Minimum Support Price (MSP) and weaken the mandi system. Rajasthan CM has also expressed his concern over the farm laws and have asked the Centre to resolve the issue. Rajastha Chief Minister Ashok Gehlot has called for an impartial enquiry into the January 26 Delhi violence. Gehlot lauded the farmers for holding peaceful protest for more than two months and claimed that farmers’ can’t do something like what had happened at Red Fort. Meanwhile, a team of forensic experts today visited Red Fort to collect evidence in connection with the violence that broke out at the iconic monument on Republic Day. The Union Home Ministry today temporarily suspended the mobile internet services in Singhu, Ghazipur, and Tikri and their adjoining areas from 11 pm of January 29 to 11 pm of Jan 31 to ‘maintain public safety and averting public emergency’. According to reports, internet services have also been suspended in 17 districts of Haryana. Reaching out to farmers during all-party meeting held ahead in wake of Budget Session, Prime Minister Narendra Modi today told the leaders of various political parties during an all-party meeting that his government has been continuously trying to resolve the issues raised by protesting farmers through talks. He said that Agriculture minister is just a call away whenever farmer union leaders want to talk, informed Union Minister Prahlad Joshi. On the other hand, farmer leaders are observing ‘Sadbhavana Diwas’ on Mahatma Gandhi’s death anniversary today and are holding a day-long fast at the various protest sites.

Earlier today, social activist Yogendra Yadav urged people to support farmers who have been protesting at Delhi borders. He said that the sentiments are changing in favour of farmers as people have realised that farmers are protesting for a right cause. Meanwhile, a team of Delhi Police has reached Jalandhar in connection with January 26 violence and Red Fort flag incident case. Yesterday, after Bharatiya Kisan Union leader Rakesh Tikait’s video went viral and a scuffle broke out between locals and protesting farmers, the farmers’ protest is getting intensified again as more peasants are pouring in at the protest site from neighbouring areas like Meerut, Ghaziabad and Muzaffarnagar. Police had to fire tear gas and resorted to baton charge yesterday to break up a clash between farmers and a large group of men claiming to be local residents who hurled stones at each other at the Singhu border. According to Delhi Police, 44 people including a man who attacked SHO (Alipur), Pradeep Paliwal, with a sword have been arrested on charges of attempt to murder and obstructing a public servant. On the other hand, the Bharatiya Kisan Union (Lok Shakti) also re-launched its protest over the new farm laws, just a day after it had withdrawn its protest. BKU (Lok Shakti) chief Thakur Sheoraj Singh Bhati called on the supporters to reach Ghazipur border. A farmers’ mahapanchayat was also held in Muzaffarnagar to extend support to the protest which is ongoing at Delhi border. Thousands of farmers have been protesting at Delhi’s borders with Haryana and Uttar Pradesh, demanding a rollback of the Farmers’ Produce Trade and Commerce (Promotion and Facilitation) Act, 2020, the Farmers (Empowerment and Protection) Agreement on Price Assurance and Farm Services Act, 2020 and the Essential Commodities (Amendment) Act, 2020.

The Delhi Police has so far registered 38 cases and arrested 84 people in connection with the violence during a tractor parade by farmers here on Republic Day, officials said on Saturday. The tractor march by farmers protesting against the three recent agriculture laws had turned violent, leading to chaotic scenes on the streets of the national capital on Republic Day. Thousands of protesting farmers had clashed with the police during the parade. Many of them, driving tractors, reached the Red Fort and entered the monument. They also hoisted flags on the domes and placed a flagstaff at the ramparts of the national monument, where the national flag is unfurled by the prime minister on Independence Day. Police had asked nine farmer leaders to join the investigation in the case on Friday, but no one turned up. (PTI)

Delhi’s Singhu border was fortified with several layers of barricades and increased presence of security personnel on Saturday, a day after violence erupted during a demonstration by ‘locals’ against agitating farmers sitting there for over two months to demand the repeal of Centre’s new agri laws. The venue on the GT Karnal road, one of the major protest sites, also had a thinner presence than previous days even though protesting farmers asserted that it was ‘swelling’ with more people from Punjab and Haryana coming to join them. The entry to the farmers’ protest venue was closely guarded by police and para military personnel with even mediapersons finding it difficult to reach there. A senior police officer, on condition of anonymity, said ‘There is blanket order not to allow free movement across the protest site in view of yesterday’s violent protest as any mischief could aggravate the situation.’ |READ MORE

Security personnel, including from anti-riot police and paramilitary forces, were deployed in strength. Multiple layers of barricades including concrete blocks were being put at the protest sites. (PTI)

The administration remained on high alert with Internet services temporarily suspended at the Singhu, Ghazipur, and Tikri borders of the national capital, as well as the adjoining areas. Haryana has already suspended the internet in 14 districts. (PTI)

Solidarity among farmers at the Ghazipur border protest site here showed no signs of waning on Saturday with their leaders reaffirming their resolve to carry on the long-drawn movement against the new farm laws. Days after BKU leader Rakesh Tikait’s emotional appeal had galvanised farmers from Uttar Pradesh and Uttarakhand to flock to the Delhi-UP border site, several farmers said, “the fight shall go on against all odds.” |READ MORE

More farmers gathered at Ghazipur, on the Delhi-Meerut highway, that has now become the new focal point of the stir, while union leaders claimed that protesters were also heading back to Singhu and Tikri borders from Punjab and Haryana, days after the crowds had waned following the violence at the tractor rally on January 26. (PTI)

AAP claims that violence that took place during tractor parade on January 26 was scripted by BJP with help of Delhi Police to ‘defame and discredit’ farmers’ movement.

Why are they not initiating a judicial inquiry? Those (farmers) who were protesting peacefully for around 70 days can’t do something like this. Impartial probe must be done: Rajasthan Chief Minister Ashok Gehlot on January 26 violence in Delhi

Nobody would support Jan 26 violence, we condemn it. Everyone has strongly deplored the farce which some anti-social elements created at Red Fort. Farmers must put forth their demands peacefully. The restraint they showed while protesting for 65 days was commendable: Rajasthan CM pic.twitter.com/NIcsk3Jjlr

The Modi govt is using draconian laws like Sedition to suppress the voice of MPs, journalists & dissenters. The violence on Republic Day was the result of HM Shah & BJP govt’s failure to maintain law & order. Scapegoating Indian citizens will not absolve them of their duties: Congress

PM simply narrated discussion being held b/w govt & farmers. He just said that Agri Minister assured farmers that he is a phone call away from them provided they accept govt’s proposal. Govt is just hedging the issue out of its egoistic & obstinate mindset: Congress’ AR Chowdhury pic.twitter.com/50aqkYhbw6

A team of forensic experts today visited the Red Fort to collect evidence in connection with the violence that broke out at the iconic monument on Republic Day. Thousands of protesting farmers had breached the monument on January 26 after deviating from their tractor rally route triggering a conflict with the police.

Farmer leaders agitating against the Centre’s new agri laws are observing ‘Sadbhavana Diwas’ on Mahatma Gandhi’s death anniversary on Saturday and holding a day-long fast at the various protest sites.

PM Narendra Modi reaches out to farmers in all-party meeting

In 11th Centre-farmer negotiation, we’d said that Govt is open for discussion. Agri Minister had said that he’s just a phone call away, whenever you give a call he’s ready for discussion. It still stands good. This is what PM said (in all-party meet): Union Minister Pralhad Joshi pic.twitter.com/5TRsXt1eLK

Delhi: Retired and current officers of Delhi Police, members of families of Police personnel who were injured in the violence during farmers’ tractor rally on Jan 26th, and Delhi Police Mahasangh stage a demonstration at Shaheedi Park in protest against the attack. pic.twitter.com/xBt1zarnJ5

Internet services also suspended in some districts of Haryana

According to reports, internet has been suspended in 17 districts of Haryana in wake of farmers’ protest.

#WATCH | I appeal to people to join the peaceful protest (in Delhi) but don’t do anything even in flow of emotions if someone tries to instigate you. We should keep in mind that we’re not going to war. This is our country&our govt: Farmer leader Balbir Singh Rajewal in Chandigarh pic.twitter.com/PTBE73sOpK

Delhi: Union Home Ministry has temporarily suspended internet services in Singhu, Ghazipur, and Tikri and their adjoining areas from 11 pm of Jan 29 to 11 pm of Jan 31, to ‘maintain public safety and averting public emergency’.

Bihar: Workers of parties in Grand Alliance form a human chain in Patna in protest against the three central agriculture laws. “We will continue to organise such protests until the laws are repealed,” says RJD MP Manoj Jha. pic.twitter.com/TsX0nUEK9X

Social activist Yogendra Yadav today urged people to come forward to support farmers protesting at Singhu Border, Tikri Border, Ghazipur and Shahjahanpur. He said that those who earlier opposed the movement are now coming out in support as they have realised that farmers are fighting for a right cuase.

Rashtriya Loktantrik Party chief Hanuman Beniwal says he is not participating in today’s all-party meeting called to discuss agenda for the Budget Session, in support of farmers’ protest.

Punjab: A Delhi Police team reached Jalandhar yesterday in connection with violence at Red Fort on Jan 26. DCP Investigation, Jalandhar says, “There was info that two youth from Tarn Taran who were part of the violence are in Jalandhar. They raided the area but the two weren’t found”

Both carriageways of NH-24, to and from Ghaziabad and Ghazipur border, have been closed: Delhi Traffic Police

Earlier around 1.30 PM yesterday, about 200 local villagers reached the Singhu border and went to meet the leaders of the Kisan Mazdoor Sangharsh Committee faction demanding that the protesters vacate the area and open the border. “They said that they have been providing all kind of help to the protesters for the last two months but now the protest is affecting their livelihood. Hence, they requested them to vacate the road. They had come on Thursday as well with the same request,” Additional Delhi Police PRO Anil Mittal said. Some farmers resisted and pushing and pulling of the police barricades, which had been erected to secure the langar tents, ensued. Later, stone pelting started, the police said. While SHO Paliwal was trying to convince the farmers to stop stone pelting from their side, he was suddenly attacked by Singh, who was overpowered and apprehended at the spot, they said. The SHO sustained grievous injuries and five other police personnel were also injured, the senior officer said. However, the protesters claimed that those who visited the protest site were not locals but goons armed with sticks.