Expectations are running high ahead of an informal meeting between Indian Prime Minister Narendra Modi and Chinese President Xi Jinping. 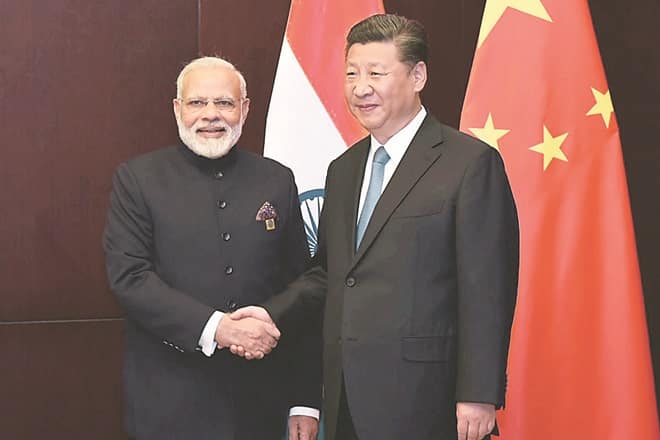 Narendra Modi-Xi Jinping to meet in China on April 27 and April 28. (PTI file)

Expectations are running high ahead of an informal meeting between Indian Prime Minister Narendra Modi and Chinese President Xi Jinping.  Modi’s informal meeting with Xi will take place in Wuhan city of central China on April 27 and 28. The meeting has been described by China as a “new starting point” in the relationship of both countries.

Tibetan spiritual leader the Dalai Lama has welcomed the upcoming informal meeting between Indian Prime Minister Narendra Modi and Chinese President Xi Jinping. On Monday while delivering convocation lecture at the Lal Bahadur Shastri Institute of Management in New Delhi, the Dalai Lama said it is necessary for both India and China to live friendly.

“I think it is really good that they are meeting. They have to live side-by-side, so it is better to live as a family,” the Dalai Lama told ANI.

“I always insist, neither China nor India has the ability to destroy (each) other. We have to live side by side, then (it is) much better to live friendly,” ANI quoted the 82-year-old Tibetan spiritual leader as saying.

China considers the Dalai Lama as its enemy. However, the spiritual leader believes both countries must learn to live like friends and have good mutual relations.

On Monday, China today said the world can expect “very positive voices” against the rising protectionism threat and changes in the world situation.

According to Chinese foreign ministry spokesman Lu Kang, some of the top issues that will be likely discussed by Modi and Xi include unprecedented changes in the past 100 years; strategic overarching long-term issues affecting bilateral ties between both countries.

“I believe you are also clear that the world is now faced with rampant unilateralism as well as the rising protectionism in the process of globalisation. All these new trends in the world have to be closely followed and debated, Lu was quoted as saying by PTI.

“Against such backdrop, China and India have a lot to discuss. We are newly emerging markets as well as developing countries with big population. So we believe the two countries will continue to uphold the globalisation so that it is more inclusive. So we have a lot of shared interests, concerns and positions,” the spokesman added.

Meanwhile, China has reassured its all-weather friend Pakistan that the relations between them would not be affected by Modi-Xi meet.

“We are ready to work together with our Pakistani brothers to undertake the historical mission of national rejuvenation and achieve the great dream of national prosperity and development,” Chinese State Councilor Wang Yi was quoted as telling Pakistan foreign minister Khawaja Asif by Reuters.

“In this way, our iron friendship with Pakistan will never rust and be tempered into steel,” he added.

Follow us on
Latest News
At $2 mn-plus, manufacturing sector paid the biggest ransom after cyberattacks
8i Ventures raises $25 m in first close for second fund
India urges world community to collectively call out those who provide safe havens to terrorists
SaaS unicorn Chargebee lays off 10% of its workforce
Udaan to go for second round of layoffs
Adani Enterprises net profit more than doubles in Q2
Plain-vanilla deposits score over floating rate FDs
Photos
Heart-wrenching! Here is a look at Morbi and the suspension bridge that collapsed
3 days agoOctober 31, 2022
In Pictures: PM Modi in Kargil to celebrate Diwali with soldiers, says, ‘All of you have been my family for years now’
1 week agoOctober 24, 2022
In Pictures: PM Modi inaugurates Deepotsav in Ayodhya; World record set by lighting of over 15 lakh diyas
1 week agoOctober 24, 2022
Read More
×
‘Arrest me if I have committed a crime, why question’: CM Hemant Soren after skipping ED summons
Don’t spare corrupt, don’t be defensive: PM Modi to CVC and anti-corruption agencies
‘Is negligence too an act of God?’ Congress sharpens attack against BJP on Morbi bridge collapse
Gujarat Elections 2022: BJP chief Nadda says party will form govt with big majority
Gujarat elections 2022: Will saffron sweep Gujarat again? Modi to Morbi – 10 factors that could make or break BJP’s chances
Neither govt nor people serious about tackling monstrous problem: Varun Gandhi on worsening air quality in Delhi