The Delhi-NCR belt, a pollution hotspot, needs a drastic reduction in level of pollutants, by up to 76 per cent in some areas, and several radical interventions for its air to meet safe standards. 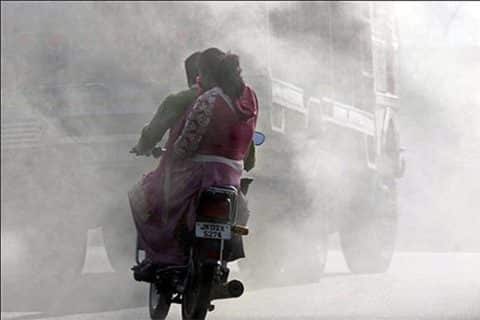 The report also said a million Indians die from the effects of air pollution every year, a link that the government has rejected. (Reuters)

The Delhi-NCR belt, a pollution hotspot, needs a drastic reduction in level of pollutants, by up to 76 per cent in some areas, and several radical interventions for its air to meet safe standards. The observation and the proposals are part of a new plan drafted by the Environment Pollution (Prevention and Control) Authority which have been submitted to the Supreme Court recently. The report focuses on 13 key pollution sources, as identified by an IIT-Kanpur study, and lists short, medium and long-term measures to be implemented by a proposed committee chaired by the Union Environment Secretary.

The percentage of reduction in PM10 required in Delhi, Faridabad, Ghaziabad, Noida and Meerut are 74, 64, 76, 56 and 60 per cent respectively while PM 2.5 and nitrogen dioxide (NO2) levels have to come down by 70 and 37.5 per cent in the national capital, the plan says. The ‘Comprehensive Action Plan for air pollution control’ is based on a 2012 blueprint prepared by the Sheila Dikshit government and a 42-point action plan of the Central Pollution Control Board (CPCB) and the Delhi Master Plan 2021, among others. While many steps like roll out of BS IV fuel norms listed by it are old and set to be implemented, it also lays out a series of fresh proposals such as installation of “vapour recovery systems” fuel stations and rationalization of “entry taxes” of public vehicles.

Vapour recovery systems prevent evaporation of petrol and diesel while tankers are filled at fuel stations while rationalization of taxes in NCR will make public transport cheaper in the region. The EPCA plan, that has been sent to the governments of Haryana, Uttar Pradesh and Rajasthan for their review, also envisages siting policy for biomedical incinerators and waste-to-energy plants. Having a siting policy will lead to some clarity on the positioning of such facilities.

This assumes importance against the backdrop of protests by residents of Delhi’s Sukhdev Vihar area against the Okhla waste-to-energy plant. People had claimed that the plant was releasing “toxic” agents which had affected their health. The roadmap lays a major thrust on the need to augment the region’s public transport system by way of increasing number of buses to 10,000 and frequency of metro among others. It also pitches for pedestrianization of commercial zones and deploying battery-operated vehicles like e-rickshaws in those areas.
The plan stresses on the need to have more ungated streets. Gated societies across the city hinder the movement of pedestrians and small vehicles.

“Implement a network plan for more secondary street networks and ungated streets to provide direct shortest routes for pedestrians and cyclists,” it says. Importantly, the plan underlines the need to differentiate between various pollutants on the scale of toxicity. “A study by the Health Effects Institute, published recently in Environmental Health Perspectives, has found that particles from coal and diesel are more harmful than wind-blown dust. “This suggests that we must priorities the more harmful particulates for action. Combustion sources — vehicles, power plants and industry — need more stringent and priority action,” it observes.

Bus Rapid Transport System or Light Rapid Transport System to be implemented in targeted high frequency routes within the city and between Delhi and other NCR cities, the plan proposes. Incidentally, the only BRTS corridor Delhi had was dismantled by the AAP government last year citing its “faulty design”. Under the parking policy head, the plan proposes that penalties related to parking should be 10 times the parking fee along with impounding of vehicles after a certain level of violation. Parking on footpaths should be made a cognizable offence under the Delhi Municipal Corporation Act and Police Act, it says.