Muzaffarpur has been the epicentre of the disease which causes an inflammation of the brain. Other symptoms include high fever, vomiting and, in severe cases, seizures, paralysis and coma. 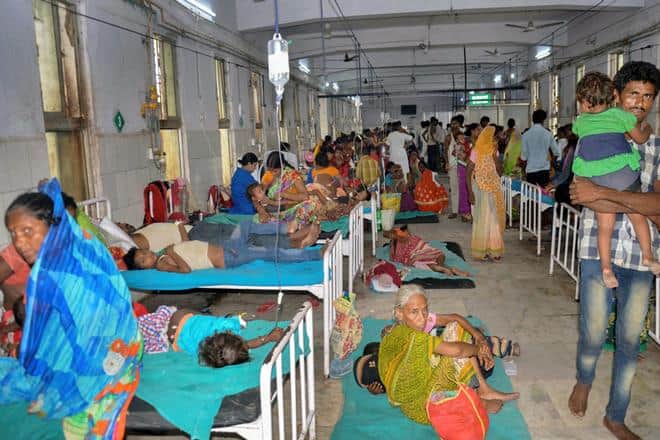 The death toll from a suspected outbreak of Acute Encephalitis Syndrome (AES) in Bihar has rose to 128 on Thursday, news agency ANI reported. In a bid to find a long-term solution, Bihar government has ordered a socio-economic survey of families whose children have been affected or have died of the disease.

Over 450 people will fall under the purview of the survey, which will be conducted by Jeevika workers, the Indian Express reported. The move comes days after chief minister Nitish Kumar said that a socio-economic survey of the families affected along with the sanitation conditions in the AES-hit areas would prove to be useful in finding a long-term solution.

Muzaffarpur has been the epicentre of the disease which causes an inflammation of the brain. Other symptoms include high fever, vomiting and, in severe cases, seizures, paralysis and coma. Other areas in Bihar which have also been hit by AES are Saraiya, Minapur, Mushahari and Kanti.

The disease is reportedly linked to litchi which has a toxic substance. When kids eat litchi on an empty stomach, it suddenly brings down the level of sugar in their body, affecting the minor’s life support system. The state government has also issued an advisory urging people not to feed litchis to their kids.

A number of affected families have been struggling to cope with the outbreak due to lack of infrastructure and adequate financial resources. A seven-year-old child died on his way to a bigger hospital, while the father of another child is looking for daily-wage work after his son died, the Indian Express reported.

To strengthen the Sri Krishna Medical College Hospital (SKMCH), the Central government has deployed 5 teams of paediatricians and paramedics in Muzaffarpur. “The teams will strengthen the clinical care to the existing patients in the hospitals and also support surveillance of cases from the peripheral areas,” Union health minister Harsh Vardhan said in a press note.

The Centre has also directed the Bihar government to set up a 100-bed pediatric Intensive Care Unit (ICU) at SKMCH.