Ease of doing business? US firms scared they need to know someone to invest in India says Nikki Haley

The Indian-American politician’s comments come at a time when Prime Minister Narendra Modi is scheduled to visit the US for a few days starting June 7. 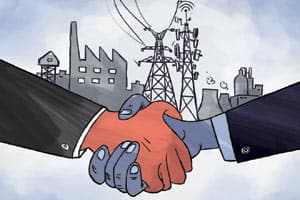 The Indian-American politician’s comments come at a time when Prime Minister Narendra Modi is scheduled to visit the US for a few days starting June 7.

At a time when the Centre is looking to attract Foreign Direct Investment (FDI), the US Republican party’s rising star and Governor of South Carolina, Nikki Haley, said on Friday that a “powerful” official system and a need for foreign companies to “know someone” in the government was making US companies “nervous” about investing in India.

Speaking to journalists at her office in Columbia, Haley said: “Firms who want to do business in India very much realise that in India you have to know people to get things done. That is scary for them. That is scary for the fact that the government is much more powerful than it is here (in the US). Here, we are servants. In India, governments are very strong and you have to know someone in the government to be able to be successful in business and that makes American companies nervous.”

The Indian-American politician’s comments come at a time when Prime Minister Narendra Modi is scheduled to visit the US for a few days starting June 7. Out of 189 countries, India is ranked 130 in “ease of doing business”, according to the World Bank. Government officials are aiming to be among the top 30 countries in the next three-four years.

Asked about her expectations from Modi’s visit, Haley said, “It is not for him to just come here and say he is an ally… I think a lot of people want to know what he is doing to really spur business between the two countries.”

Haley said, “From a South Carolina perspective, we want to do more business with India. So I hope he will talk as much as about what he is doing in India and what he could do to better trade deals with us.”

During his visit, Modi is scheduled to address a joint meeting of the US Congress and hold talks with President Barack Obama to review the progress made in key areas of defence, security and energy.

Asked if Modi’s visit would translate into business opportunities, Haley said, “He (Modi) has the responsibility to sell India and he has the responsibility to create business relationships with other countries. That is why it will be interesting to hear what he has to say because we know the challenges they are going through. I have kept up with the challenges that are happening in India and for those challenges business is the key; creating jobs and making sure you bring more industries is key. So it will be interesting.”

With investments totalling $10,706 million (as on 2014), India is currently the fourth fastest-growing source of FDI in the United States and Haley felt that South Carolina’s engagement with India will grow over the years. “I am very optimistic about the business we are continuing to do with India. I think it will go far beyond my time and we will continue to see great progress.”

Born to Indian parents, Haley, 44, is one of the most highly rated Republican leaders in the country. She was widely touted as the pick for the vice-presidential post by former presidential hopefuls like Marco Rubio and Ted Cruz. This year, she was chosen by the Republican leadership to deliver the rebuttal to President Barack Obama’s State of the Union address.