Earthquake in Pakistan: At least 200 people were killed and more than 1,300 others injured on Monday as a powerful 7.5- magnitude earthquake – the strongest in 10 years – rocked Pakistan, sending severe shock waves as far as Punjab and PoK. 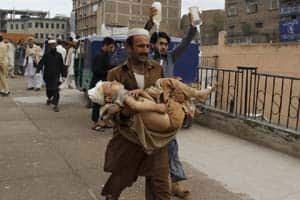 Earthquake in Pakistan: At least 200 people were killed and more than 1,300 others injured on Monday as a powerful 7.5- magnitude earthquake – the strongest in 10 years – rocked Pakistan, sending severe shock waves as far as Punjab and PoK.

The quake’s epicentre was located near Jurm in northeast Afghanistan, 250 kilometres from Kabul and at a depth of 213.5 kms, according to the US Geological Survey.

The temblor collapsed buildings, triggered landslides and stampedes, prompting the government to rush army personnel to the affected areas for rescue operations.

Pakistan army chief General Raheel Sharif flew to some affected areas of Khyber Pakhtunkhwa to assess the rescue operation in the region that is the worst hit.

The death toll in Khyber Pakhtunkhwa province and Federally Administered Tribal Areas (FATA) is 191, with 5 killed in Punjab, 4 in the PoK and in Gilgit Balitistan, several local media reports said.

Over 1,000 people were injured, 956 in Khyber Pakhtunkhwa alone. Malakand Division in the province is the worst hit with 137 dead.

The army chief took aerial view of quake-hit areas of Khyber Pakhtunkhwa and was also briefed about army rescue and relief operation.

“QRFs are busy in rescue work mainly in Malakand, Dir, Chitral and Bajaur while continuous damage assessment is under way,” he added.

The Provincial Disaster Management Authority (PDMA) has directed the district administration to utilise rescue and relief funds. Emergency has been declared in all government hospitals and food and necessary items were dispatched to the affected areas.

Pakistan Meteorological Department (PMD) said that the quake hit the country at about 2:09 pm local time.

Several landslides have been reported in mountainous areas of the country, leading to fears that the death toll may increase.