Earthquake in Pakistan: Death toll due to quake rises to 250, over 1,600 injured

In the wake of the earthquake that hit Pakistan hard, rescuers braved tough terrain to deliver aid to people living in Taliban insurgency-hit areas, even as the death toll in the disaster rose to 250… 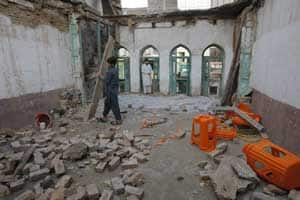 In the wake of the massive earthquake that hit Pakistan hard, rescuers braved tough terrain to deliver aid to people living in Taliban insurgency-hit areas like Khyber Pakhtunkhwa, even as the death toll in the disaster rose to 250 with over 1,600 injured. These areas have faced the brunt of the impact of the powerful 7.5 magnitude quake.

The death toll in the earthquake — the strongest in 10 years — in Pakistan has now risen to 250 from the earlier figure of 228 which included 214 dead in Khyber Pakhtunkhwa (KP) and Federally Administered Tribal Areas (FATA), 5 in Punjab, and 9 in PoK, local media reports said.

KP and FATA were most seriously affected as the powerful earthquake rocked Pakistan and the region yesterday causing at least 250 deaths, Geo News reported.

The National Disaster Management Authority (NDMA) said at least 1,620 people have been injured across Pakistan.

“Till this morning, 185 people have died and 1,456 including women and children sustained injures in KP as several are in critical condition,” said an official of the Provincial Disaster Management Authority (PDMA).

He said PDMA has constituted seven teams to visit the affected districts for rapid need assessment and to supervise relief activities on grounds.

Over 2,000 tents, blankets and floor mats have been dispatched to the affected districts besides 1,000 food packets for the worst-affected Chitral district.

The official said Chitral, Swat, Shangla, Dir Upper and Lower and Toarghar districts are the most affected districts where infrastructure and houses were damaged on a large scale.

Pakistan Army rescue teams are conducting assessment of damage and loss of property caused by the earthquake.

The military said 27 of 45 landslides have been cleared on the strategic Karakoram highway. Capacity of Combined Military Hospitals has also been increased by 30 per cent across the country.

The initial quake struck at 2:09 pm yesterday and was followed by seven aftershocks, measuring as high as magnitude 4.8, according to the United States Geological Survey (USGS).

Thousands spent last night outdoors in near-freezing temperatures reluctant to go back inside for fear of aftershocks, reports said.

Meanwhile, Prime Minister Nawaz Sharif returned to Islamabad following his US tour. Upon arrival he summoned a meeting to discuss relief efforts in the aftermath of the earthquake.