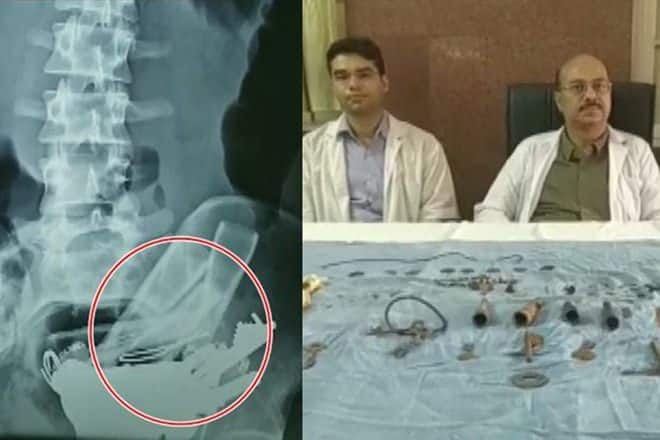 Doctors of a government-run hospital in Rajasthan’s Udaipur were in for a shock when they found 80 items including a chillum, keys and coins inside a patient’s stomach on Monday. Four doctors undertook the operation which lasted about 90 minutes, news agency ANI reported.

The 35-year-old man complained of a severe stomach ache and was then made to undergo an X-ray.

“We were stunned to see small and big metal objects including nails inside his stomach,” Dr DK Sharma was quoted as saying by ANI. The photos released by the doctors revealed smoking pipes, several coins, pieces of cloth, safety pin a long wire, a bunch of keys and other solid objects. There were a couple of other objects too that looked like nail cutters.

Rajasthan: Doctors remove more than 80 items including keys, coins & ‘chillam’ among other items from a patient’s stomach in Udaipur. pic.twitter.com/zrT4iHcvu0

Choosing not to delay the case any further, the team of doctors prepared the patient for an operation and removed the objects that weighed a staggering 800 gm in total. Doctors also made a discovery that the patient is mentally unsound and also an addict.

The doctor said that the patient had a habit of ‘swallowing everything’ and as he began to complain about continuous pain in his stomach, his family brought him to the government hospital in Udaipur.

Dr Sharma added that the patient is out of danger and is undergoing necessary treatment. In a similar incident in May, a team of doctors removed 116 nails, iron pellet and long wire from the stomach of a middle-aged man.