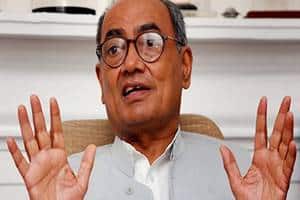 Congress leader Digvijay Singh today recorded his statement with the Economic Offences Wing (EOW) here in connection with an alleged fraud case in a matter that dates back his chief ministership in Madhya Pradesh.

Singh and two others, including a former minister, are facing criminal charges like cheating and forgery.

“Digvijayji went to the EOW office with me at 11.30 am and got his statement recorded. We left the EOW office at around 2.30 pm,” his lawyer Ajay Gupta told PTI.

“Digvijayji is being hounded by the BJP government in the state for raising the Vyapam scam. My client is facing false accusations. It’s purely a case of witch-hunting,” he said.

Last year, Singh and two others, including one of his former Cabinet colleagues, were charged by EOW with fraud and showing undue favour to a private college.

In the case, the AICC General Secretary, who was chief minister of the state from 1993 to 2003, along with his Technical Education Minister, Raja Pateria, have been accused of unlawfully reducing a penalty on RKDF College from Rs 24 lakh to Rs 2.5 lakh.

Besides the two, RKDF Chairman Sunil Kapoor has also been booked.

According to a complaint by Radhavallabh Sharda, a local journalist, Singh and Pateria waived the penalty imposed on the institute by the Education Department over some “wrongful” admissions in 2000-01 and 2001-02.

The complainant had stated the college had requested Singh to reduce the penalty to Rs 5 lakh which was slashed to Rs 2.5 lakh.

The three had been booked under IPC Sections 420 (cheating), 467 (using as genuine forged document), 120 (b) (conspiracy) and relevant sections of Prevention of Corruption Act.