‘Did I seek votes for them?’ Dushyant Chautala questions Congress amid criticism over JJP extending support to BJP

In the just-concluded Assembly elections, the BJP emerged as the single largest party with 40 seats while the Congress bagged 31 seats. The JJP emerged as the kingmaker with 10 seats in the 90-member Legislative Assembly. 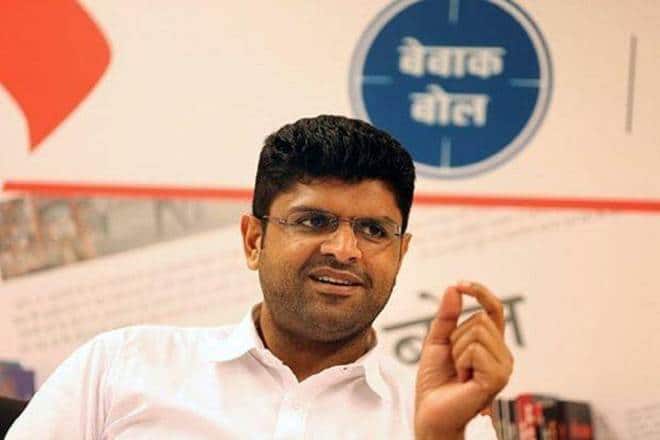 Dushyant Chautala on Monday slammed the Congress party for questioning his decision to support the BJP in Haryana.

Haryana Deputy Chief Minister Dushyant Chautala on Monday replied to the Congress leaders for criticising his decision to extend support to the Bharatiya Janata Party to form the next government. The Jannayak Janata Party (JJP) chief said that he decided to support the BJP to provide a stable government to the people of Haryana.

“We neither asked votes for BJP nor Congress. Jannayak Janata Party (JJP) decided to provide a stable government to the state,” he said.

“For those who are saying ‘vote kisko, support kisko’, did we ask for votes for them (Congress)?” the JJP chief asked.

Chautala’s remark comes after the Congress party accused him of betraying the people’s mandate. The Congress party lobbied to bring the JJP on board to form the next government in Haryana but Chautala chose to join ranks with the BJP instead.

Former Congress CM Bhupinder Singh Hooda said, “People gave votes to someone, but JJP gave its support to other. JJP disrespected the people’s mandate against BJP and hurt the feelings of the public.”

In the just-concluded Assembly elections, the BJP emerged as the single largest party with 40 seats while the Congress bagged 31 seats. The JJP emerged as the kingmaker with 10 seats in the 90-member Legislative Assembly. The BJP with support from the JJP and a few independent MLAs gained the majority in the House. BJP leader Manohar Lal Khattar and Dushyant Chautala took oath as the CM and Deputy CM on Sunday at Raj Bhawan in Chandigarh.