Development and conservation must go together: Pranab Mukherjee

Development and conservation must go hand in hand, President Pranab Mukherjee said today as he underlined the need for “sustainable” development. 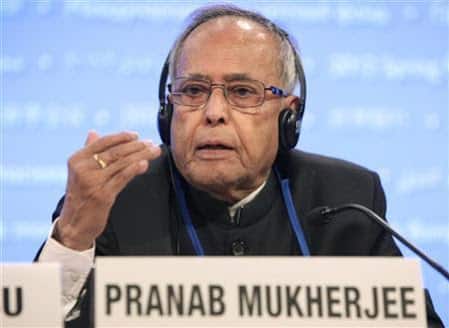 Development and conservation must go hand in hand, President Pranab Mukherjee said today as he underlined the need for "sustainable" development. (Image: Reuters)

A batch of 47 officers today passed out from the academy, set up by the British in 1926. The landmark building, once on the outskirts of the city, is now sandwiched between the booming Uttarakhand capital and lush green forests.
“The final objective is that we must have sustainable development… The riches of mother Earth are not our earning. We have inherited it and we have no right to destroy it. We must hand it over to generation next,” he said. The president appreciated the fact that forest cover in the country had increased from 64.2 million hectares in 1987 to 79.4 million hectares, or 19.32 per cent of its land mass.

He said the forest policy of 1952 had underscored the need to maintain forests over one third of the country’s land. “This goal of 33 per cent of forest cover was one of the professed goals behind the setting up of the Indian Forest Service in 1966, and it is time that concrete measures are ensured in this direction,” he said. Earlier, Uttarakhand Chief Minister Trivendra Singh Rawat called for inclusive development, while stressing that forest service officers should not ignore the expectations of the people.