Expressing his anguish over the ATMs running out of cash, Ramesh Tripathi, a trainer at a gym in South Mumbai, said, “The ATMs have virtually become defunct. The ‘ATM Closed’ boards are now a permanent feature.” 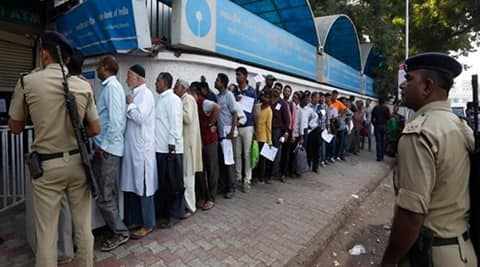 Long queues at ATMs in Mumbai due to demonetisation (AP)

Cash crunch continued to hit the people in Mumbai over 40 days after the demonetisation move, even as the queues for depositing the old scrapped notes at the banks eased. However, the people are irked as ATMs at many places continue to run out of cash.

“There is a short queue for withdrawal and almost no queue for the deposits. You can see it here,” said a senior executive of a leading private bank in Fort area. A senior officer at Department of Post, Maharashtra and Goa Circle, said, “The numbers of depositors as well the amount of deposits across the five regions in the circle have reduced by over 80 to 85 per cent and so is the case with opening new accounts.”

However, some people in the city complained that the note ban has increased their difficulties. Sheetala Prasad, a grocery owner from suburban Kandivili, said, “These days have been the worst days for my business. We are facing a lot of problems for want of cash.” He expressed unhappiness over the Rs 50,000 withdrawal limits for current account and Rs 24,000 for savings account.

Expressing his anguish over the ATMs running out of cash, Ramesh Tripathi, a trainer at a gym in South Mumbai, said, “The ATMs have virtually become defunct. The ‘ATM Closed’ boards are now a permanent feature.”
“But, we are able to withdraw money from banks. I got Rs 10,000 from a bank in Worli today in less than 5 minutes,” he added.

A real estate broker from suburban Mulund, on condition of anonymity, said, “The deals in real estate sector have dropped drastically. Even the deals which were made before the demonetisation move, have got cancelled now.”
He also said that the note ban is expected to cause a dip in real estate prices in the coming months.