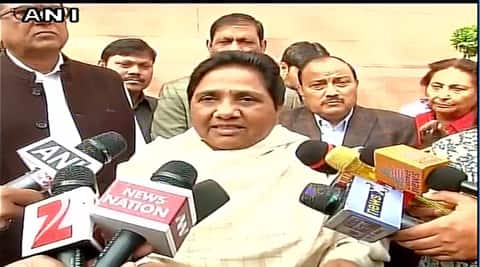 Mayawati challenged the Prime Minister and said that if Narendra Modi wanted a real survey, he must dissolve the Lok Sabha and face the elections. (ANI)

Bahujan Samaj Party Chief and former UP Chief Minister Mayawati on Thursday claimed the Prime Minister Narendra Modi’s survey app was sponsored and fake. Mayawati further challenged the Prime Minister and said that if Narendra Modi wanted a real survey, he must dissolve the Lok Sabha and face the elections. It was earlier seen that the demonetization scheme had the support of 93% of the 5,00,000 people who had taken the survey through the Narendra Modi app, according to the PM’s official website.

The app has been criticised for revealing a biased form of people’s judgement on the demonetisation scheme. Questions such as, how many people in India use smartphones and how many are educated enough to participate in the survey. Moreover, the app doesn’t have a clear “NO” option. For example, on any given question, the options are, ‘Completely agree’, ‘Partially agree’ and ‘Can’t say’. There is no option for anybody who thinks that the policy might be a bad one.

Earlier PM Narendra Modi had launched the app to get ‘first hand’ answers to the people’s opinion about the must controversial demonetisation scheme. The entire nation seems to have gone into a sense of frenzy ever since Prime Minister Narendra Modi announce the scrapping of Rs 500 and Rs 1000 notes overnight. While the decision has been lauded by many for being a bold move in the fight against corruption, it has also been criticised for its lack of planning and poor execution. Besides, the opposition has also accused PM Modi of running a scam through the scheme. Congress VP Rahul Gandhi and Delhi CM Arvind Kejriwal had even gone on to say that the PM had informed his associates about the scheme before it had actually been announced.

Next Story
Demonetisation: Narendra Modi government gets cracking on printing of notes; check it out