Delhi violence: 23 including ‘main conspirators’ arrested, police say many of them have criminal record 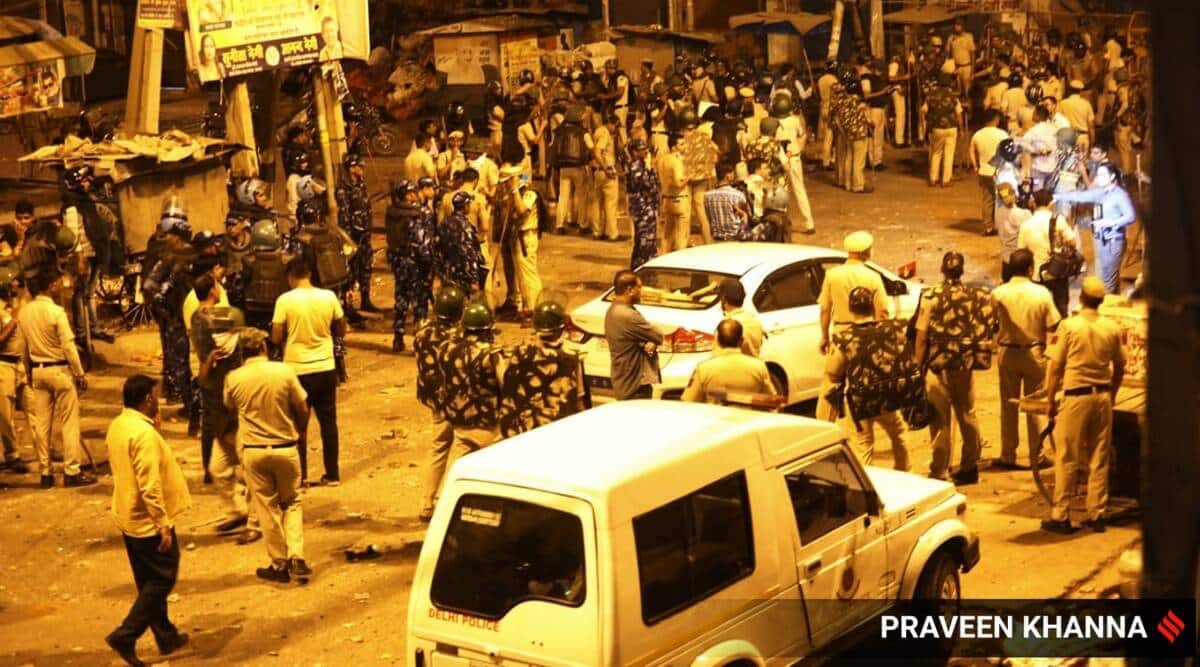 The Delhi Police has so far arrested 21 people and apprehended two minors on charges of rioting and unlawful assembly over the communal clashes that broke out during a Hanuman Jayanti procession in the city’s Jahangirpuri area.

Police said they have also recovered a pistol from one of the accused– a 21-year-old, a resident of a slum cluster in Jahangirpuri’s CD Park, which he allegedly used during the commission of crime on Saturday evening.

He was also found to be previously involved in two cases of assault, and was also arrested repeatedly under preventive sections and booked five times under the Gambling Act and the Arms Act.

Police said initial investigation has revealed that one of the accused, who works at a mobile phone repair shop, is the main conspirator and allegedly has a criminal record.

DCP (Northwest district) Usha Rangnani said, “During investigation, one of the conspirators, Mohd Ansar (35), a resident of B Block in Jahangirpuri, has been arrested. He was found to be previously involved in two cases of assault. He was also arrested repeatedly under preventive sections and booked five times under the Gambling Act and Arms Act. Further investigation is on.”

According to senior officers, at least eight of those arrested have a criminal record, with some being arrested in the past on charges ranging from rioting to attempt to murder.

A Delhi court has sent Ansar and Aslam to one day police custody while the remaining have been sent to 14 days judicial custody.

Earlier, Special Commissioner (Law and Order-Zone 1) Deependra Pathak said, “Fourteen persons have been arrested so far and investigation is on. Further process of identification is being done based on CCTV and other video footage.”

“Right now the situation is totally under control. We have our additional force deployed. We have done peace committee meetings and are also in touch with the prominent residents of the areas. They gave assurances that they would maintain peace in their respective areas,” he added.

Rangnani also said nine people, including eight police personnel and one civilian, were injured during the clashes, and were treated at the Babu Jagjivan Ram Memorial Hospital.

The sub-inspector who suffered the bullet injury is in a hospital and his condition is stated to be stable, the senior police officer said, adding further investigation is underway.

The Special Branch had alerted police deputy commissioners of districts to stay vigilant, and they were asked to make adequate arrangements during such processions.

As on Sunday morning, there was heavy police deployment in the Jahangirpuri area where the clashes took place. Flag marches were also being carried out along with foot and motorcycle patrolling. Drones were also used in the process to oversee the activities and ensure no untoward incidents takes place.

According to police, more than 50 personnel were deployed during the procession.

A team of Rapid Action Force has also been deployed to keep a tight vigil on the situation which is now under control, Rangnani said.

“Facial recognition software is being used to identify those involved in creating the ruckus. All mobile footage and CCTV cameras installed in and around the vicinity are being scanned to identify the culprits and trace them,” said another police officer.

Officials said overall security arrangements have been stepped up in all the remaining 14 police districts of the national capital and technical surveillance mounted to ensure no untoward incident takes place.

This is the first communal flare-up in the national capital since the February 2020 riots in northeast Delhi which had left over 50 dead and scores injured.