A photograph of Pathan pointing a gun at Delhi Police Head Constable Deepak Dahiya had surfaced on social media during the communal riots last year. 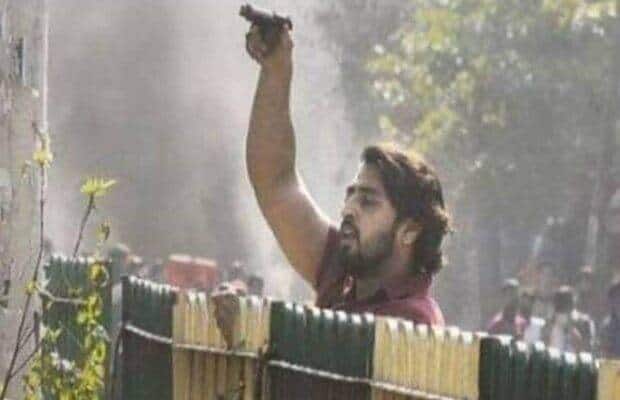 A photograph of Pathan pointing a gun at Delhi Police Head Constable Deepak Dahiya had surfaced on social media during the communal riots last year.

A Delhi court has framed charges of rioting and attempt to murder against Shahrukh Pathan, who had allegedly pointed a gun at a police officer during the 2020 Delhi riots, while rejecting his plea seeking discharge.

A photograph of Pathan pointing a gun at Delhi Police Head Constable Deepak Dahiya had surfaced on social media during the communal riots last year. He was arrested on March 3, 2020, and is currently lodged in Tihar Jail.

While framing the charges, additional sessions judge Amitabh Rawat said it was quite apparent that Pathan led a group of rioters, attempted on Dahiya’s life, obstructed and used criminal force on a public servant on February 24, 2020.

The judge charged Pathan under sections 147 (punishment for rioting), 148 (rioting armed with a deadly weapon), 186 (obstructing public servant in discharge of duty), and 188 (disobedience to order duly promulgated by public servant) of the IPC.

Charges were also framed under sections 353 (assault), 307 (attempt to murder) read with section 149 (member of unlawful assembly guilty of a common offence) of the IPC and various sections of the Arms Act, to which he pleaded not guilty and claimed trial.

Pathan had sought discharge from sections 307 (attempt to murder) and 188 (disobedience to order duly promulgated by public servant) of the IPC on grounds that he had no intention to kill the cop and was unaware that section 144 of the CrPC was in force. Section 144 of the CrPC prohibits the assembly of four or more people in a specific area.

Denying the relief, ASJ Rawat noted that “intention to kill” the cop was clearly made out from the statement given by Dahiya that Pathan aimed at his head and fired but he managed to escape. The judge further said contentions made by Pathan’s counsel that he did not attempt to kill the cop but only threatened him by firing in the air cannot be a basis for discharge in the face of the specific statement by Dahiya and the video footage.

“Secondly, even as per the video footage, the accused raised his pistol (not sideways but straight) aiming at the victim who is taller in height than him, but the direction of the pistol is certainly aimed at the head of Head Constable Deepak Dahiya, and even the point at which the trigger is pulled, the aim is straight towards Head Constable Deepak Dahiya,” the judge noted in an order dated December 7.

“Usually after firing or pulling of the trigger, there is a jerk, and the hands and the pistol is raised up because of the jerk. Thus, even the video shows firing by accused Shahrukh Pathan from pistol in daylight with an aim to kill Head Constable Deepak Dahiya,” he added.

The judge also took exception to the argument by the counsel of the accused that after the first firing, Pathan had a second opportunity to kill Dahiya but did not as there was no intention. Judge Rawat said that the incident occurred in a flash of seconds, and to diminish the valour of a brave policeman by arguing it as an act of magnanimity of the accused in not killing the policeman is neither palatable nor legally sound.

Denying discharge in section 188 of the IPC, the judge said it was not an ordinary case of groups committing an unlawful act, but riots of such a nature as has not been witnessed since the anti-Sikh riots of 1984 and hence, knowledge of section 144 of the CrPC can be presumed.

Pathan had raised the contention that the promulgation order under section 144 of the CrPC was not brought to his knowledge and hence, section 188 of the IPC is not made out. The judge, however, said, “Once the promulgation order is in force, knowledge is presumed in the context of the situation that prevailed at that time. Thus, charge under section 188 of the IPC is made out.”

Judge Rawat further said that discrepancies in the statement of Dahiya in the charge sheet and certain interviews will be looked into at the stage of the trial. Besides Pathan, the judge also framed charges against four more accused, Kaleem Ahmad, Ishtiyak Malik, Shamim, and Abdul Shehzad, in the case.

Communal clashes had broken out in northeast Delhi in February 2020 after violence between Citizenship (Amendment) Act supporters and its protesters spiralled out of control, leaving at least 53 people dead and over 700 injured.