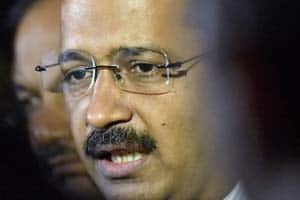 In its statement, the CBI said that it has not sealed the offices as yet, although it did not elaborate further.

Arvind Kejriwal CBI ‘raid’ row: It is a black day in independent India’s history and an undeclared Emergency has been imposed, a furious Aam Aadmi Party (AAP) said today following the CBI raid at Delhi Secretariat, with Chief Minister Arvind Kejriwal calling FM Arun Jaitley a ‘liar’ and PM Narendra Modi a ‘coward and psychopath’, alleging PM was behind the action.

The AAP made an open challenge to the Centre to dig out anything against its government and said the target of CBI raid was Arvind Kejriwal and not senior IAS official Rajender Kumar, Principal Secretary to the Chief Minister, whose office and residence were searched.

“When Modi cudn’t handle me politically, he resorts to this cowardice. Modi is a coward and psychopath,” Kejriwal tweeted, in a scathing attack on Modi.

The AAP also launched a no-holds-barred attack on the Centre with its spokespersons calling it a “black day” in Independent India’s history.

“The Modi government has imposed an undeclared emergency in Delhi. Never ever a Chief Minister’s office has been raided. It is a black day for India’s democracy,” said AAP Spokesperson Raghav Chadha.

The CBI claimed it carried out searches at Kumar’s office at the Delhi Secretariat and not that of the Chief Minister.

Kumar, an IIT alumnus, is accused of favouring certain companies in awarding government contracts from 2007-2014.

The 1989 batch IAS officer, who held several important positions under the previous Congress government, was appointed Principal Secretary to the Chief Minister in February when the AAP wrested power for the second term.

Kumar is known to be close to Arvind Kejriwal.

“CBI lying. My own office raided. Files of CM office are being looked into. Let Modi say which file he wants? I am the only CM who dismissed, on my own, a minister n a senior officer on charges of corruption and handed their cases to CBI.

“If CBI had any evidence against Rajender, why didn’t they share it with me? I would have acted against him,” said Arvind Kejriwal in a series of tweets.

The CBI said the searches had nothing to do with Arvind Kejriwal or his tenure and that the graft case against the officer also pertained to his past.

As soon as the news of the raid broke, AAP fielded a battery of spokespersons and launched a sharp offensive against the Centre on social media with hashtags such as #ModifearsKejriwal and #CowardModi.

With Arvind Kejriwal setting the tone of the attack, specifically targeting Narendra Modi, the AAP leaders minced no words in condemning, what they said was an attempt to “terrorise” a popularly elected government and an honest Chief Minister.

“Do they think people are fools. Haven’t they realised that after their defeat in Delhi and Bihar. Do you think people will believe in what they say that the CBI is independent?” party leader Kumar Vishwas said.

Ashutosh said the issue was “sealing” of the Chief Minister’s office under the pretext of probing his Principal Secretary Rajender Kumar.

“What if PMO is sealed, if there’s some information about Nripendra Mishra? This is how Modi works, he doesn’t like opponents,” he said.

“Did you seal offices of Shivraj Singh Chouhan, Vasundhara Raje Scinida and Sushma Swaraj’s offices? Kejriwal too is an elected CM with a massive majority. But the raid happened, because we speak against them (Centre) openly,” Ashutosh added.

Chadha said with the raids at Delhi Secretariat all “limits have been crossed” and that the Prime Minister would “meet the same fate as Congress faced when it misused the CBI.”

“The CM’s office is raided, his files are raided. Media Advisor to CM is not being allowed to enter the premises. The office has been sealed. Never ever has this happened in independent India. The way Narendra Modi is working, the people of this country are watching,” Chadha said.

Arvind Kejriwal reacting angrily on Twitter to the CBI raids. Here are the tweets:

In a case where sitting LG and former CM are also being named, Kejriwal’s CM office being raided. https://t.co/SAgFVKGe8w

FM lied in Parliament. My own office files are being looked into to get some evidence against me. Rajender is an excuse

If CBI had any evidence against Rajender, why didn’t they share it wid me? I wud hv acted against him(2/2) — Arvind Kejriwal (@ArvindKejriwal) December 15, 2015

Modi is a coward and a psycopath — Arvind Kejriwal (@ArvindKejriwal) December 15, 2015

When Modi cudn’t handle me politically, he resorts to this cowardice — Arvind Kejriwal (@ArvindKejriwal) December 15, 2015

CBI lying. My own office raided. Files of CM office are being looked into. Let Modi say which file he wants? — Arvind Kejriwal (@ArvindKejriwal) December 15, 2015