Manohar Parrikar took a dig at A K Antony, saying though he had a clean image, it was not reflected in defence procurement during his time. 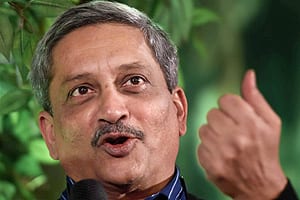 Defence Ministry has set up a high powered committee under the chairmanship of former DRDO chief V K Aatre to recommend guidelines for selecting Indian private firms for strategic partnership under 'Make In India' initiative in the six areas which include submarines, aircraft and missiles, said Defence Minister Manohar Parrikar. (PTI)

Defence Minister Manohar Parrikar today took a dig at his predecessor A K Antony, saying though he had a clean image, it was not reflected in defence procurement during his time.

“I agree that Antony may have a clean image that does not mean the reflection of cleanliness in the actual procurement,” Parrikar said when asked about delay in defence procurement during UPA regime.

Asserting that NDA government will bring in transparency in defence purchases and at the same time will ensure speedy procurement, he said, “There is no solution only by remaining honest.”

He also mentioned about illegal practice of commissioning in defence deals in the past. “I have been told that there have been hundreds of people in Delhi who by becoming defence agents acquired lavish bungalows.”

Asked why he chooses to travel on commercial flights instead of using his official aircraft, Parrikar said he does not want to waste national resources.

He, however, added that when he feels there is a need to travel in an IAF aircraft, he will use it. Defence Minister usually uses IAF Embraer aircraft for domestic flights.

“I do not believe that simplicity can be an election campaign like many people have been doing it. I will not do it. It is only your trend and nature. That does not qualify you as a good administrator or a bad administrator,” he said at the Aaj Tak Agenda.