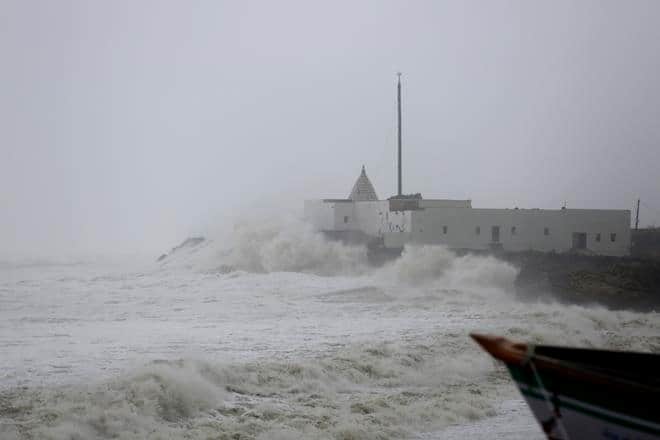 Cyclone Vayu: Waves crash on the coast of the Arabian Sea in Veraval, Gujarat. (AP Photo)

Cyclone Vayu in Gujarat: Gujarat remained on high alert despite the Indian Metereological Department (IMD) saying that Cyclone Vayu had changed course and would not hit the state coast. A Skymet weather report said that the weather models were indicating that there is a fair amount of probability that very severe cyclone Vayu may just skirt the Gujarat coast near Porbandar, close to Dwarka or Okha coast.

IMD said that the storm has made a small deviation, and will only skirt the Gujarat coast. “But, its effect will be there with strong winds and heavy rain,” Secretary at the Ministry of Earth Sciences M Rajeevan told news agency PTI.

Gujarat government carried out a massive evacuation drive on Wednesday, evacuating around three lakh people to temporary shelters. The Indian Army, Air Force, Navy and Coast Guard have been kept on standby for relief and rescue operations. IAF helicopters and around 300 marine commandoes could also be deployed in low-lying coastal areas.

As a precautionary measure, schools and colleges across 10 districts in Gujarat will remain closed on June 12 and 13.

“Praying for safety and well-being of all those affected by Cyclone Vayu. The government and local agencies are providing real-time information, which I urge those in affected areas to closely follow,” Modi tweeted.

Gujarat Chief Minister Vijay Rupani while talking about the cyclone said, “According to IMD bulletin, Cyclone Vayu, which was going to hit Gujarat, has moved towards Oman. But the administration will continue to be on high alert for the next 24 hours.” He added that as a precaution, the schools in the coastal districts of Saurashtra and Kutch will remain closed on Friday.

Cyclone Vayu, that was heading towards Gujarat has changed its course and spared the coastal state and is now moving towards Oman. Even though the cyclone is moving away from the state, there is still a danger of heavy winds and rain in the coastal areas. Amid the alerts about the cyclone, state authorities had already evacuated three lakh people from the low-lying areas near the coast to safer places.

Cyclone Vayu: Defence Minister Rajnath Singh today reviewed the preparedness of Navy along the Maharashtra and Gujarat coast. PTI reported that senior officials briefed Singh at a meeting in naval headquarters. The minister was briefed about the ability and readiness of various assets of Western Naval Command which were kept ready for deployment to the affected areas in case of requirement.

“The Western Naval Command, Mumbai is closely monitoring the developing situation. Indian Navy ships Chennai, Gomati and Deepak at Mumbai have embarked with humanitarian assistance and disaster relief, and are ready to be deployed at short notice,” the Navy said.

Cyclone Vayu is moving away from the Gujarat coast but the danger of heavy winds and rainfall is still there. State authorities have already evacuated three lakh people from low-lying areas near the coast to safer places. In a statement issued at 5 pm, IMD said: “The cyclone is likely to move north-northwestwards for some time and then northwestwards, skirting the Saurashtra coast (and) affecting Gir Somnath, Diu, Junagarh, Porbandar and Devbhoomi Dwarka with wind speed of 90-100 kmph gusting to 110 kmph during the next 12 hours.”

Cyclone Vayu: Tips to stay safe during and after storm

Here are some important tips to stay safe during and after the attack of cyclonic storm which is likely to hit the coastal areas of Gujarat.

The cyclonic storm has changed its course and may not hit the Gujarat coast as predicted earlier. However, the state government has maintained that the situation is still “critical”. The authorities have evacuated over three lakh people living in low-lying areas in the coastal districts. Airports have been shut and over 70 trains canceled as a precautionary measure. The state has sounded an alert and it will remain in place till Friday.

Cyclone Vayu | No damage to airport infrastructure in Gujarat: AAI

Airports Authority of India has informed that the impact of cyclone Vayu has been milder and there has been no damage to most airports in Gujarat. The AAI has suspended flight operations at airports in Porbandar, Diu, Bhavnagar, Keshod and Kandla to avoid disruptions and damages to infrastructure.

Gujarat: Power supply has been disrupted in over 550 villages of Gujarat due to cyclone Vayu. Efforts are on to restore the supply. The state power authority chalked out an action plan well in advance in view of the cyclone threat.

Gujarat Chief Minister Office has informed that a pregnant lady in need was rescued from Shiyalbet Island in a boat and safely shifted to hospital. In another incident during the evacuation, a delivery was conducted by ‘108’ team in the ambulance itself in Maliya of Junagadh district.

The state government had issued an advisory for the fishermen on Tuesday asking them to avoid the deep seas. The All India Fishermen Association president Veljibhai Masani president appreciated the timely warning. “Around 8,000 fishermen from Saurashtra region were earlier planning to venture into the sea in about 1,200 boats, but they decided against it after the warning,” he said.

Defence minister Rajnath Singh reviewed the preparations of the Indian Coast Guard and Navy for relief and rescue operation during Cyclone Vayu.

Officials are working on restoring power supply in nearly 560 villages, which were affected due to Cyclone Vayu. The Gujarat Urja Vikas Nigam Limited team is finding it hard to reach some of the water-logged coastal areas.

The Airport Authority of India (AAI) has suspended flight operations at airports in Porbandar, Diu, Bhavnagar, Keshod and Kandla for 24 hours starting midnight Wednesday. AAI said that a review meeting would be held in the afternoon to decide on resumption of flights from these airports.

Around 52 teams of the National Disaster Response Force and 11 columns (each having around 70 personnel) of the army have been deployed in the coastal districts of Gujarat.

Besides, 24 army columns have been kept reserved for any emergency situation.

In Veraval, a hub of Gujarat’s fishing industry where Vayu was expected to make landfall, heavy wind and rain battered the beaches. Fishing boats were splintered by huge waves crashing onto shore. Local police were making a last minute effort to convince hut dwellers to leave their homes.

No casualties due to Cyclone Vayu yet: Gujarat Govt

No casualties have been recorded due to Cyclone Vayu now, Pankaj Kumar, Additional chief secretary of revenue was quoted as saying by news agency ANI. “The deaths (6 deaths in last 2 days) is not due the cyclone, rather it is due to monsoon,” Kumar said.

After being warned of rough weather along the coast, Goa has sought a report of cruise ships operating in the Mandovi river. The Goa Tourism Development Corporation (GTDC) has received complaints that some of these cruise ships were operating close to sea waters.

In Odisha, according to Skymet Weather, few spells of rain and thundershowers associated with lightning likely to continue over multiple districts of Odisha in the next six-eight hours.

The storm is very likely to move north-northwestwards for sometime and then northwestwards skirting the Saurashtra coast affecting Gir Somnath, Diu, Junagarh, Porbandar and Devbhoomi Dwarka with wind speed between 135 and 145 kmph, gusting to 160 kmph from June 13 afternoon, the Cyclone Warning Division said in its latest bulletin.

Despite the alert issued in view of Cyclone Vayu, the Somnath Temple remains open. “Temples can’t be closed. We have requested tourists not to visit, but ‘aarti’ being performed since many years can’t be stopped,” Gujarat Minister Bhupendrasinh Chudasama said.

As a precautionary measure, the Indian Railways has announced that all the trains for this region have been either short-terminated or cancelled for two days, starting 6 pm Wednesday. The Airports Authority of India announced that flight operations will remain suspended at five airports in Gujarat for 24 hours from midnight Wednesday to minimise the damage to airport infrastructure and to avoid inconvenience to passengers due to the cyclone.

Skymet Weather has also predicted that Cyclone Vayu could weaken into a Caterogry 1 storm. But strong winds and rough seas may still cause damage.

An IMD scientist told news news agency ANI that Cyclone Vayu won’t hit Gujarat, but will pass nearby from Veraval, Porbandar and Dwarka. “Its effect will be seen on the coastal regions as there will be heavy wind speed and heavy rain as well,” Manorama Mohanty said.

Praying for the safety and well-being of all those affected by Cyclone Vayu.

The Government and local agencies are providing real-time information, which I urge those in affected areas to closely follow.

Skymet Weather on Thursday said that Cyclone Vayu had changed course and may not hit Gujarat. THe report said that the weather models were indicating that there is a fair amount of probability that very severe cyclone Vayu may just skirt the Gujarat coast near Porbandar, close to Dwarka or Okha coast.

As a precautionary measure of Cyclone Vayu heading towards Gujarat coast, Maharashtra government announced that all beached in the Konkan region would be shut off to the public on June 12 and 13.

A scientist at India Meteorological Department (IMD) told news agency ANI that Cyclone Vayu will not hit Gujarat. He said the storm would pass nearby from Veraval, Porbandar and Dwarka and the effect will be seen on coastal regions in form of heavy wind speed and rains. Both Indian Railways and the Airports Authority of India have decided to halt operations as a precautionary measure. Railways has announced that for this region have been either short-terminated or cancelled for two days, starting 6 pm Wednesday. Flight operations at five ariports in Gujarat will remain suspended for 24 hours from midnight Wednesday to minimise the damage to airport infrastructure and to avoid inconvenience to passengers due to the Cyclone Vayu.