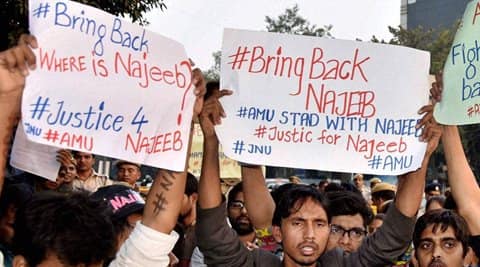 Scenes of protest at the JNU campus. (PTI)

The Crime Branch team on Monday reached the Jawaharlal Nehru University (JNU) to begin its probe into missing student Najeeb Ahmed’s case. The students of JNU have criticised the Delhi Police over the delay in tracing Najeeb, who has been missing from the campus after allegedly being beaten up by a mob of 20 students comprising mostly the ABVP members.

JNUSU president Mohit Pandey last month told ANI, “The police has not taken any action for finding Najeeb. They have not followed the procedures and responsibilities. Those who had beaten him were not interrogated.” Najeeb’s family has so far been critical of the police for not being able to locate him. Denying reports that Najeeb was taking anti-depressant medicines, his sister had earlier alleged that the police was trying to give a different direction to this case.

“We hope the Delhi Police works on the right path to find him and not defame him. Please don’t try to defame Najeeb…The Delhi Police needs to go in the right direction. We have also requested for a CBI probe,” she said. The Delhi Police had last month increased the reward from Rs. 2, 00,000 to 5, 00,000 for the person, who provides information about the missing JNU student. Earlier on October 14, Ahmed was allegedly slapped by an ABVP member canvassing for the hostel elections.

The first year M.Sc Biotechnology student has been missing from the next day. Since then, the students along with Najeeb’s family members have been protesting at the campus against the alleged police inaction and demanding the arrest of ABVP members. A police complaint was earlier filed under Section 365 of the Indian Penal Code (IPC) for kidnapping or abducting with intent secretly and wrongfully to confine a person, and a proctorial inquiry was also initiated by the varsity.