Cricket, temple and a metro selfie: How Narendra Modi found a new Obama in Malcolm Turnbull, compared him with Steve Smith 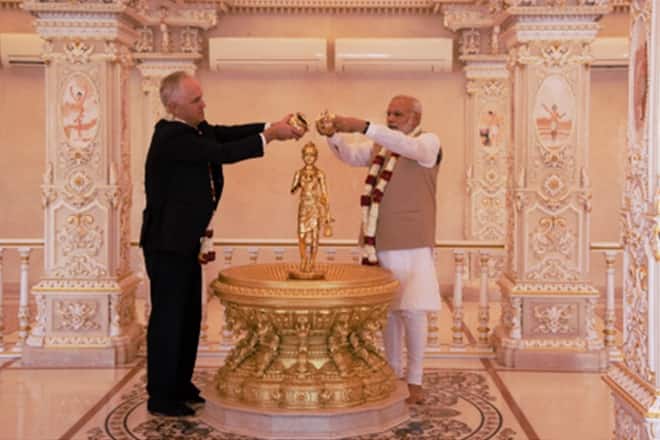 Prime Minister Narendra Modi surprised the country today by taking his Australian counterpart Malcolm Turnbull on a Delhi Metro ride and to the famous Akshardham Temple in the national capital. Not only this, Modi and Turnbull even took a selfie in the Delhi Metro. However, much before taking the ride, Modi took to cricketing examples to welcome Turnbull.  The Indian PM compared his Australian counterpart with “the other Australian captain Steve Smith” who is on a run-scoring spree in India for the last one month. Modi wished Turnbull a similar success like Smith.

Modi-Turnbull camaraderie today reminded one of the Modi-Obama friendship that bloomed in the final years of ex-US President Barack Obama’s tenure.

Since 2014, Prime Minster Narendra Modi has adopted a different style of diplomacy than past leaders of the country. He tries to bond personally with his foreign counterparts, instead of simply discussing business. Giving a personal touch to diplomacy has earned PM Modi a lot of successes globally. In international politics, it pays to have a personal bondage with global leaders. Modi appears to have mastered this art as he never leaves an opportunity to develop a friendship with foreign leaders. Once he even tried to develop a bond with Pakistan Prime Minister Nawaz Sharif, and even went on a surprise visit to Lahore, but the friendship died under the effect of Pak-sponsored terrorism.

Modi bonding with the Australian PM today also shows the evolving relationship between the two nations seeking closer ties in a number of fields. It wasn’t just about a metro ride or worshipping at the Akshardham temple.

During his speech, welcoming the Australian PM, Modi talked about cricket, apart from business and other deals. “I am delighted to welcome you on your first ever visit to India. Just last month, we witnessed a thrilling conclusion to the Border-Gavaskar trophy. In my speech at the Australian Parliament in 2014 I had spoken of legendary Bradman and Tendulkar. Today, Virat Kohli in India and Steven Smith in Australia are shaping the young brigades of cricket. I hope your visit to India is as productive as it has been for Steven Smith’s batting, the other Australian Captain.”

“We took a number of forward-looking decisions to further strengthen our partnership, including the decision to soon hold the next round of negotiations on our Comprehensive Economic Cooperation Agreement,” Modi said.

India and Australia today inaugurated the TERI-DEAKIN Research Centre on Nano and Bio Technology. Modi said it is a “classic example of the kind of cutting-edge science and technology cooperation that is happening between our two countries.”

Modi also said that Australia is now ready to export Uranium to India. “I am particularly pleased that we have been able to conclude an MOU on Security Cooperation during this visit,” Modi said.