Crackling story of fire crackers in India, you must read this Diwali

Firecrackers have become an integral part of Diwali celebrations over the years. Pollution concerns have forced us to think whether to burst crackers on Diwali or not. 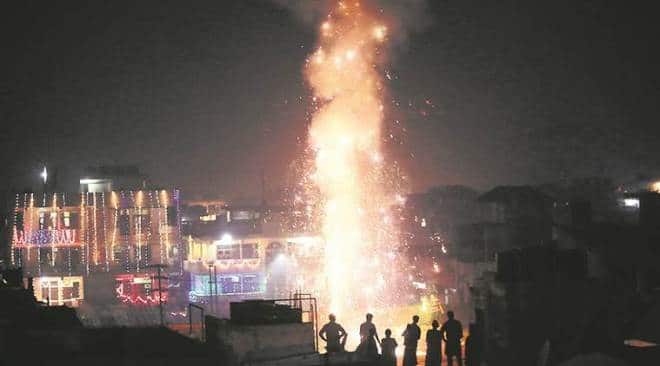 The first fireworks factory in India was set up in Kolkata in the nineteenth century. (Reuters)

Firecrackers have become an integral part of Diwali celebrations over the years. Pollution concerns have forced us to think whether to burst crackers on Diwali or not. And there is a huge debate going on this issue across the country. But, before debating about cracker, are you aware of its interesting story?

“The use of fireworks in the celebration of Diwali, which is so common in India now, must have come into existence after about 1400 AD, when gunpowder came to be used in Indian warfare,” late historian P K Gode wrote in his account, History of Fireworks in India between 1400 and 1900, which was published in 1950.

Not just its primary ingredient Gunpowder, fireworks too have a long history in India. Gunpowder was invented in 10th or 11th century in China. It was earlier dubbed as “devil’s distillate,” as it attracted onlookers with flash and bang.

While the military use of gunpowder evolved in China, its show and gimmick value also gained popularity over a period of time. It is believed that the gunpowder technology was brought to India and Europe from China by the Arabs.

Razzaq, ambassador of the Persian sultanate, who stayed in Vijaynagar in 1443 AD during the reign of Devaraya II, wrote in one of his notes, “One cannot without entering into great detail mention all the various kinds of pyrotechny and squibs and various other arrangements which were exhibited”.

In many medieval Indian kingdoms, fireworks and pyrotechnic shows existed during festivals or special events manufacturing formulas for fireworks were found within Kautukachintamani, a Sanskrit volume by Gajapati Prataparudradeva (1497-1539), an author from Orissa.

Fireworks had begun to become part of grand scale Diwali festival by rulers during 18th century. A historical account by Rai Bahadur DB Parasnis in Marathi translating to English fireworks mentions the arrival of an English pyrotechnician in India in 1790 AD, who first impressed the British in Calcutta, who was then sent to Nawab Asafaddanula of Lucknow, whom he impressed with a display in the sky of colorful fireflowers, fishes, serpents among others.

During the time when the Mughal empire was breathing its last and British East India Company was afoot realising its designs in India, the knowledge of fireworks had become quite common so much so that many references to Diwali began surfacing in number of publications. Very often, these makers of fireworks were also the manufacturers of gunpowder, the raw materials for which were readily available in India.

The first fireworks factory in India was set up in Kolkata in the nineteenth century. Soon after independence, Sivakasi in Tamil Nadu emerged as India’s firecracker hub. Unlike in the colonial and medieval eras, with increase in the population and economic growth of the Indian middle class and with ready supply coming in from domestic industry, bursting of firecrackers only increased tremendously.