In an exclusive conversation with Financial Express Online, Communist Party of India (Marxist) Politburo member Nilotpal Basu reveals how the party plans to counter both the BJP as well as Trinamool Congress. 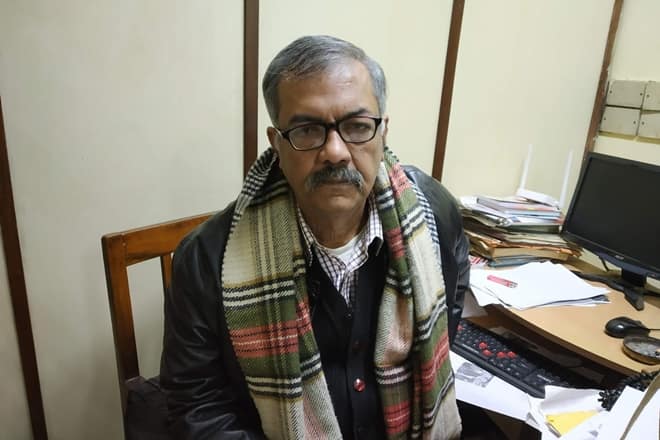 Nilotpal Basu reveals how the party plans to counter both the BJP as well as Trinamool Congress. (Image source: Anish Mondal)

Amid the buzz around the formation of a Grand Alliance or a third front to counter Narendra Modi, the CPI(M) has ruled out any such possibility of an alliance of all opposition parties, with or without the Congress and the BJP. The party has called the federal front a ‘non-starter’ and likened it to kite-flying which is being sponsored by the BJP itself. In an exclusive conversation with Financial Express Online, Communist Party of India (Marxist) Politburo member Nilotpal Basu reveals how the party plans to counter both the BJP as well as Trinamool Congress. Here are edited excerpts from the exclusive interaction:

How many seats does the Communist Party of India (Marxist) target to win in the 2019 Lok Sabha elections? Is there a realistic assessment?

We are not going by the seats we target. The basic approach is to develop what we want to achieve in West Bengal during the elections. Our basic understanding is that we have to defeat both the BJP and the Trinamool Congress in the elections in the state. There are about 42 seats. So, our attempt will be to defeat Bharatiya Janata Party (BJP). Along with that, since TMC is running the state government, it has unleashed an onslaught. It has also been seen as tacitly facilitating the BJP in the state and an eye to polarization to the extent that they can actually facilitate BJPs progress in the state. That will help them to divide the opposition vote. There is an agenda for polarization along the minority communal lines. In the recent past, they have also gone to great lengths in replicating some of the Hindutva agenda. We have seen it in Ram Navami celebration, Hanuman Jayanti etc. So, it is pretty clear that it is the Left parties which can throw a real secular challenge. In Parliament, TMCs have actually helped BJP in the passage of passing bills. Therefore, our attempt is to defeat both the BJP and TMC in the upcoming 2019 Lok Sabha elections from West Bengal.

Recent elections have shown the BJP gain space as the prime opposition party. How does CPI(M) plan to counter the rise of BJP in West Bengal?

BJP’s vote percentage has increased and it is largely due to the facilitation and at the behest of the TMC. Therefore, targeting the BJP would be based on policy like livelihood of the people. We think that BJP’s strength as it has been projected is far more trumped up than what is the ground reality. By taking on the policies and mobilising the livelihood — we have organised a big protest on farmers, a major agrarian crisis in rural areas for the first time which never happened during the Left front rule that farmers were forced to suicide. The major crops in the state like jute, paddy, potato are facing a huge crisis. The cost of production has gone up whereas the farmers are not getting their minimum price when they try to sell their agricultural commodities. Apart from this, West Bengal was a leading industrial state but has subsequently degraded due to the neglect of the central government. In the later stage of the Left front rule, there were signs of industrial revival. Many new investors were coming. But the whole scenario underwent adverse change due to the change of the government. Therefore, we are now organising workers i.e. industrial, organized and unorganized sector in a big way. All these will be reflected in the 48 hours strike that is taking place from January 8 onwards. So, based on these struggles we can build a political force in West Bengal in the coming elections.

Apart from BJP, the people are also experiencing the authoritarian regime of TMC. The mood of people has changed in asserting their right to vote. There has been a lot of violence in the recent past, general voters were disallowed from casting their franchise rights.

Is CPI(M) forging any sort of alliance with Congress for the 2019 Lok Sabha elections?

If the so-called third front becomes successful in gaining power at the Centre and a situation arises for Mamata Banerjee to secure the post of PM, will CPI(M) extend its support to her?

We don’t think that there would be any all India pre-poll arrangement covering all the political parties. There is also no question of any third front or federal front. They are non-starters. Essentially these are kite flying which is being sponsored by the BJP itself. We are in no way to contribute in any manner.

What is CPI(M)s stand on Rahul Gandhi as Prime Minister?

Ours is a parliamentary democracy where people actually choose their representatives. It is for the parliament members to decide after the publishing of the election results. Now, how that will take place, will depend largely on representations of political parties do have in the 17th Lok Sabha.

So, CPI(M) is not supporting any pre-poll alliance?

No, we have evolved three slogans – defeating TMC in West Bengal, increasing the representation of CPI(M) in the Left and we will march towards an alternative secular government.

Union Cabinet has allowed 10 per cent reservation for the upper backward castes and needs to bring in a Constitution amendment bill in the Parliament to implement it. Will CPI(M) support it?

We also are in favour of an idea which provides for reservation among the weaker sections, unreserved categories. At the same time, the government has proceeded with the idea on the eve of the election. The decision also requires a constitutional amendment. If the government is at all serious, they would have done this much earlier. So, it seems that it is more of a pre-election exercise and it could turn out like jumlas. The fundamental question is – there are different reports regarding unemployment. The situation is terrible. There has been a loss of 1.1 crore jobs in 2018 alone. Who is going to get benefit from reservation? Because for enjoying the benefits of reservation, you at least need to generate jobs.

Regarding support- the time is very short. General practice is that during the passage of any bill, there should be wide consultations among the political parties because one needs two-thirds of the members present and 50 per cent voting in favour of such legislation. The manner in which the government has handled the whole issue is simply a mockery of the legislative process. Therefore, we have to see first the nature of the bill and so on.

But Union ministers are claiming that there have been many jobs that have been created in the Modi regime.

For the last two years, the government has stopped releasing the official data. After that, we could have a debate on whether employment is being generated or not. But it is clear that after demonetisation and the manner in which GST was implemented, employment has suffered far more, investments have been going down and there was large scale de-industrialisation, de-nationalization. These all have contributed to the generation of unemployment in the country. The employment needs to be redefined as not only on the basis of employment but also on the basis of sustainable income. The unemployment issue is the second largest factor which is opposition and resistance to this government and it has been reflected in the recently concluded assembly elections.

Is this a good way for the government to go ahead with reservation?

I think, in a country like India, one needs a reservation because people suffer from both social and economic inequality.

What’s your take on BJPs Rath Yatra in West Bengal? Will it help the saffron party to gain seats?

BJPs Rath Yatras have been postponed. It is simply an attempt of communal polarization. They are also an understanding that communally polarizing West Bengal is not easy as they think because somehow the livelihood issues are coming to the fore and government’s performance is found to be wanting.

On the question of Sabarimala again, what the RSS and the BJP are doing is heinous. In Sabarimala, what happened that some people went to the court and they wanted to have the choice of going to and offering their worship before Lord Ayappa. After much deliberation, the division bench of the apex court had opined that there should not be any discrimination. On the basis of that, the state government has no other alternatives except taking responsibility for those devotees who want to visit the temple and offer prayers. The RSS, BJP and Congress all agreed in the initial phase but when some sections of devotees raise these questions and when there is a top court order that government should ensure all those devotees who are keen on offering prayers, the government has to only provide protection. Therefore, belief is one thing but those who are saying that we want to go and those who don’t want them to go, they are imposing their views. We feel that under the guise of this whole question, there is an attempt to take Kerala back to the medieval ages. Now, RSS and BJP are creating violence and acting like terrorists. So, we think that the state government will do everything possible to honour the beliefs of the devotees as well as devotees who want to offer prayers.