The Union Home Ministry said that in an order under the Disaster Management Act, “Directions were issued that district and state borders should be effectively sealed. States were directed to ensure there is no movement of people across cities or on highways.” 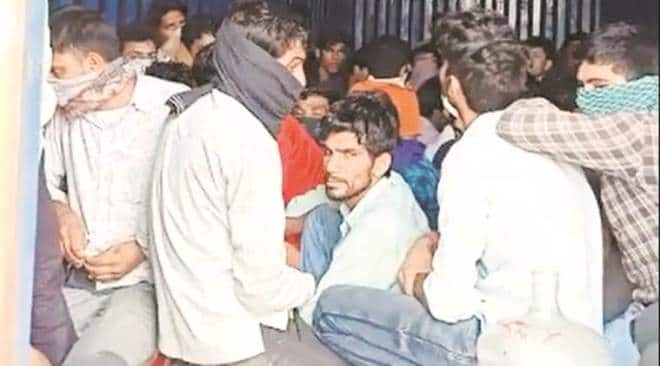 The Centre also asked states and Union territories to make adequate arrangements for food and shelter for the poor, including migrant labourers at their place of work.

As desperate migrants continued to try and make their way home, the Centre passed fresh orders Sunday, directing that district and state borders be sealed effectively and ordering that all people travelling during the lockdown period be put under mandatory 14-day quarantine.

The Union Home Ministry said that in an order under the Disaster Management Act, “Directions were issued that district and state borders should be effectively sealed. States were directed to ensure there is no movement of people across cities or on highways.” Only goods movement should be allowed, it said, adding that district magistrates and police superintendents would be personally responsible for implementation of these directions.

A Group of Ministers that met on Sunday to monitor the situation was told that supply of essentials for a minimum 10 days was being maintained.

The Centre also asked states and Union territories to make adequate arrangements for food and shelter for the poor, including migrant labourers at their place of work. State Disaster Relief Funds are to be used for the purpose, with the Centre saying, “sufficient funds are available with states” under this head.

The advisory called for enforcement of 14-day quarantine for those travelling, saying, “The migrant people, who have moved out to reach their home states/home towns, must be kept in the nearest shelter by the respective State/Union Territory Government quarantine facilities after proper screening for a minimum period of 14 days as per standard health protocol.”

Earlier, the Centre had said landlords should not charge labourers or students during this period or evict them, warning of action. Sunday’s advisory said, “States have been told to ensure timely payment of wages to labourers at their place of work during the period of lockdown without any cut… All the employers, be it in the industry or in shops and commercial establishments, shall make payment of their workers, at their work places, on the due date, without any deduction, for the period their establishments are under closure during the lockdown.”

Ministry of Health Joint Secretary Lav Agarwal again emphasised the need for a complete lockdown for desired results against coronavirus in the 21-day period. “If one person in one district does not follow instructions, we are back to the same situation,” he said, during the daily briefing.

Sidestepping a question on whether the movement of migrants had caught the government unawares, he said, “You have to understand that this is an unprecedented situation. A flood or an earthquake affects only one part of the country at one time. But this is something that affects the whole country at the same time. We seek your support in this.”

Agarwal added that the same quarantine protocol as in place for those returning from foreign countries in the early days will apply to the migrant labourers going home. “According to their contact history and other details, they will have to stay in home quarantine for 14 days or in a facility quarantine if it is so required.”

Cabinet Secretary Rajiv Gauba and Home Secretary Ajay Kumar Bhalla held video conferences with chief secretaries and police chiefs of states on Saturday evening and again Sunday morning. “It was noted that, by and large, there has been effective implementation of guidelines across all states and Union territories,” the government said.

The group of ministers that reviewed the situation Sunday included Rajnath Singh, Amit Shah, Ram Vilas Paswan, Ramesh Pokhriyal Nishank, Prakash Javadekar, Hardeep Singh Puri, Narendra Singh Tomar and Smriti Irani. They were briefed on the arrangements put in place for effective implementation of the lockdown and told that the supply of essential commodities such as food, medicines and petroleum products was “satisfactory”.