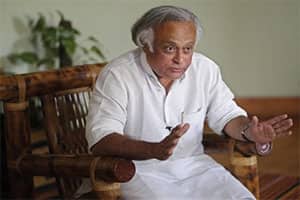 "I am sorry that the honourable minister and a senior leader from Punjab has levelled wild allegations against me. I didn't say anything offensive," he told reporters. (Reuters)

“He remains a challenge. We have to take him on directly. In the GSPC scam the issue is Modi and it is a Rs 20,000 crore ghapla(scam),” Ramesh told PTI.

A delegation of Gujarat Congress leaders last month met President Pranab Mukherjee and sought a judicial probe into the alleged Rs 19,760 crore scam in Gujarat State Petroleum Corporation(GSPC) when Modi was chief minister of the state.

Ramesh also said that in the last two years since Modi became prime minister there has been a “vast gap” between what was promised and delivered and what was said and done and the opposition needed to “exploit” it fully.

A known detractor of Modi, Ramesh said that while taking on the prime minister the Congress needs to understand that the party is fighting an ideological battle which is completely different.

Nothing moves within the BJP and government without the blessings and approval of the prime minister, he said.

“To think that Modi is different is not correct. All happenings in HRD, rewriting of textbooks, erosion of autonomy of IITs. These are all Modi’s blessings.”

“(Subramanian) Swamy’s attacks has his blessings. Not a leaf moves within BJP and Government without Modi’s blessings and approval”, he said. Swamy had recently targeted RBI Governor Raghuram Rajan.

Incidently, Ramesh was the first Congress leader who had said in 2013, a year before the 2014 Lok Sabha elections that Modi poses both a “managerial as also an ideological challenge” for the party which was then ruling at the Centre.