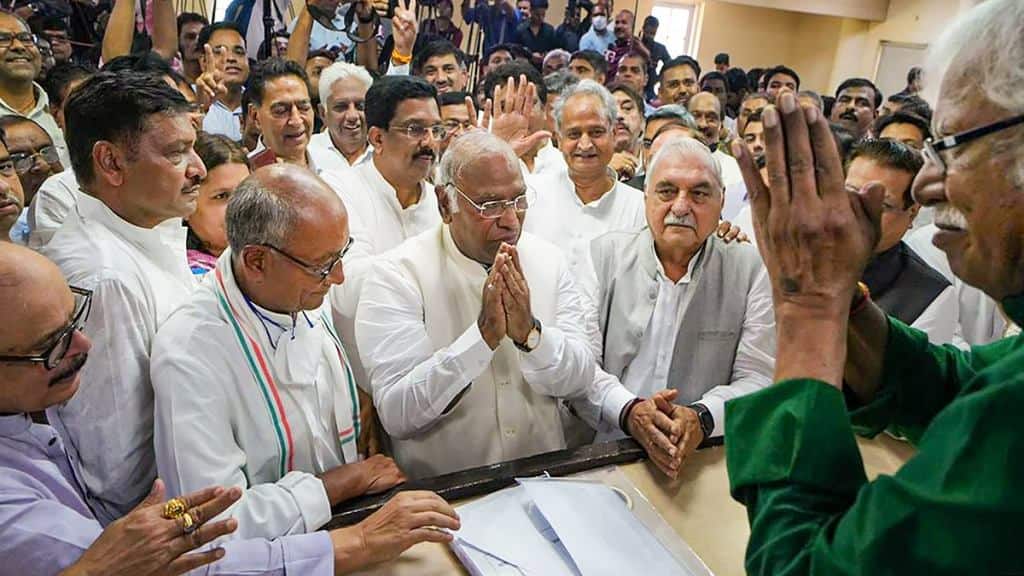 Rajasthan Chief Minister Ashok Gehlot on Sunday said veteran party leader Mallikarjun Kharge has the experience to strengthen the Congress and would emerge as a clear winner in the party presidential poll, scheduled to be held on October 17.

Gehlot added that Kharge’s rival in the race Shashi Tharoor belongs to the “elite class”.

“Kharge has a long political experience. He has a clean heart, he comes from the Dalit community and Kharge is being welcomed everywhere,” Gehlot told reporters, after paying homage to Mahatma Gandhi on the occassion of Gandhi Jayanti at the secretariat in Jaipur, as quoted by PTI.

Calling Tharoor “class apart”, Gehlot said that the experience of Kharge can’t be compared with the Thiruvananthapuram MP. Gehlot is one of the proposers of Kharge for the All India Congress Committee (AICC) elections, results for which will be out on October 19.

“Tharoor is a class apart; he is from an elite class but the kind of experience which is needed to strengthen the party at booth, block and district levels, that is with Kharge and cannot be compared to Shashi Tharoor,” he said.

“Therefore, it will naturally be a one-sided contest for Kharge,” Gehlot added.

Following the scrutiny of nominations on Saturday, Congress Central Election Authority chief Madhusudan Mistry said he received nominations for three candidates, and the nomination of Jharkhand Congress leader KN Tripathi was rejected as it had signature issues.

However, the last day of withdrawal of resignation is October 8.

A Dalit leader from Karnataka, Kharge (80) has emerged as the clear favourite for the Congress president’ post, and resigned from the post of Leader of Opposition in the Rajya Sabha in a letter sent to Congress interim president Sonia Gandhi on Friday night.

This is in line with the “one person, one post” principle decided at the Congress’ ‘Chintan Shivir’ in May.

Also Read: Gandhis told me there is no ‘official’ candidate in party chief’s election: Shashi Tharoor; hints he won’t withdraw from fray

The polling by more than 9000 Pradesh Congress Committee (PCC) delegates will be held on October 17, if any, and counting on October 19, with results being declared on the same day.

The last Congress chief election was held in 2000, and in 22 years, this will be the first time a non-Gandhi will hold the post. The Gandhis have chosen to remain neutral in the chief polls.