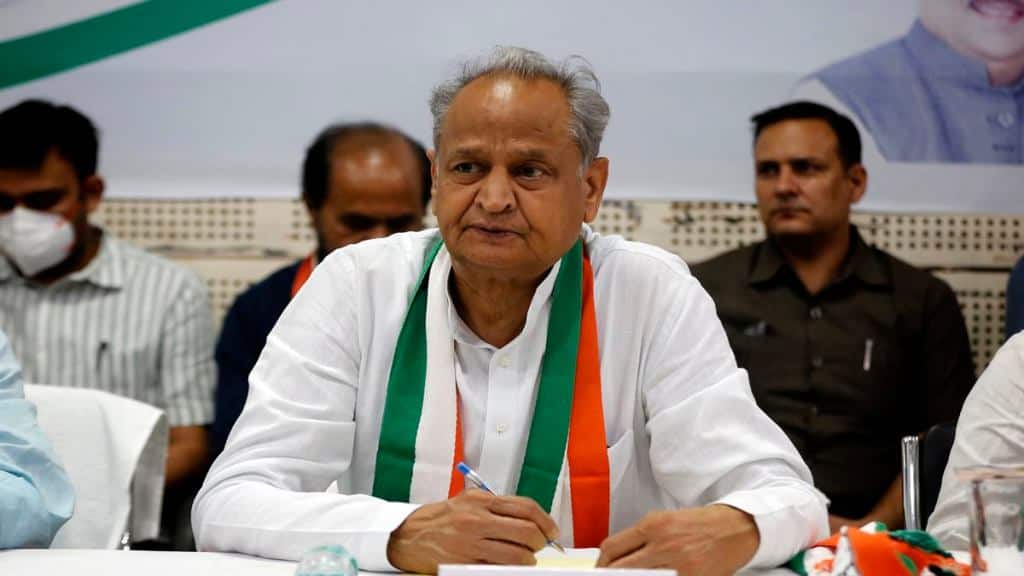 Rajashthan CM Ashok Gehlot along with other party leaders at Rajiv Gandhi Bhavan in Ahmedabad on Tuesday. Express photo/File.

Senior Congress leader Digvijaya Singh is likely to file his nomination for the election to the party president’s post on Thursday, PTI reported, quoting sources.

Singh on Wednesday left Kerala for Delhi. Accompanying him in the flight was AICC general secretary (organisation) K C Venugopal. Both the leaders had participated in the Congress’ Bharat Jodo Yatra, a 3,500 km padayatra from Kanyakumari to Kashmir.

Earlier, on September 23, Singh had said that he would not be running for the post of the Congress chief. Addressing a press conference in Jabalpur, Singh had said although he was not contesting, he would follow whatever decision the party “high command” took.

After a rebellion by the Rajasthan Congress, Gehlot arrived in Delhi on Wednesday night in a special flight, amid speculation that he will meet Congress interim president Sonia Gandhi today.

Gehlot told reporters that several internal issues have cropped up within the party ahead of the presidential elections, and that will be resolved, adding that under the leadership of Sonia Gandhi “there is discipline in the party”.

“The events being reported by the media are small issues which keep happening. The media may have its own perspective on these events,” the Rajasthan CM said.

“Matters of a family are part and parcel of internal politics. We will solve everything,” he added.

Gehlot also said that for the party the Congress president is the most important person and every one works under her discipline.

“You will see that in the coming days, decisions will be taken on the crisis the country is facing. We are concerned about issues on which Rahul Gandhi is undertaking a yatra. Whether it is inflation or unemployment or the dictatorial tendencies overwhelming the nation,” Gehlot said.

With Kerala MP Shashi Tharoor filing his nominations for the top post, other names that are coming up as front runners in the race are KC Venugopal, and Mallikarjun Kharge.

Also Read: Who will be new Congress president? Hunt on as Jaipur rebellion puts question mark on Gehlot’s candidature

Earlier, Gehlot had said that Congress leader Rahul Gandhi had said that no members of the Gandhi family would be running for the elections. Nominations for the Congress president’s election can be filed till September 30, and elections will be held on October 17.