Seafood products are among the most widely-traded food commodities in the world, with estimates for 2015 placing the value of international fish trade at $130 billion. 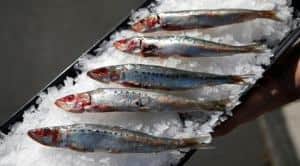 The global fisheries sector could suffer an annual revenue loss of $10 billion by 2050 due to changes in climatic conditions, says a study by the University of British Columbia. Global warming and ocean acidification are causing considerable damage to the sector, leading to lower total catch and higher domination of low value catch in the total catch.

Seafood products are among the most widely-traded food commodities in the world, with estimates for 2015 placing the value of international fish trade at $130 billion. The fisheries sector supports 660 to 820 million people directly or indirectly, which is about 10–12% of the world’s population, if the dependents of fishers are taken into account. Globally, fish also provides more than 2.9 billion people with 20% of their animal protein needs and is a crucial source of micro-nutrients. Marine scientists Vicky WY Lam, William WL Cheung, Gabriel Reygondeau and U Rashid Sumaila report that changes in ocean conditions, including temperature, sea ice extent, salinity, pH, oxygen levels and circulation, lead to shifts in the distribution range of marine species, changes in primary and secondary productivity, and shifts in timing of biological events. Warmer temperatures may also lead to decreases in maximum body sizes of marine fishes.

The combined effects of the predicted distributional shift and changes in ocean productivity under climate change are expected to lead to changes in species composition and hence global redistribution of maximum catch potential (MCP), with projected increases in MCP in high latitudinal regions and decreases in the tropics. These changes have large implications for people who depend on fish for food and income, and thus the contribution of fisheries to the global economy.

According to the study, under high CO2 emission scenarios, the projected increases in fish catch in high latitudes may not translate into increases in revenues because of the increasing dominance of low value fish, and the decrease in catches by these countries’ vessels operating in more severely impacted distant waters, the reports states. The study finds that developing countries with high fisheries dependency are negatively impacted. However, some developed countries such as Greenland and Iceland could see revenue increases as more fish move into cooler waters.

The study also puts countries like India coming under greater stress due to changes in climate. India’s fish catch during 2015 fell by 5.3% year-on-year, largely due to a sharp decline in the landing of oil sardines in the south west coast of the country. Higher sea surface temperature, lack of food in the sea near to the coast and over-exploitation of the sardine population is said to be the reason for the decline in sardine landing. India stands seventh with regard to marine capture fish production in the world and the sector supports four million fishermen population.