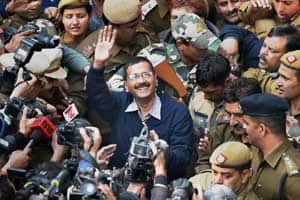 Arvind Kejriwal-led Aam Aadmi Party (AAP) appears set for a sweeping victory in the Delhi Assembly elections for which voting took place, according to exit polls.

Bharatiya Janata Party (BJP) was projected to be the second largest party way behind AAP. Congress could be virtually wiped out, the polls shown on television channels said.

India Today-Cicero poll after the end of polling gave AAP 38 to 46 seats in the 70-member House and BJP 19 to 27 while Congress is predicted to get between three and five.

Today’s Chanakya poll on News 24 channel gave AAP a higher figure of 48 seats and 22 to BJP. The poll says Congress and allies may fail to open account.

Aam Aadmi Party Chief Arvind Kejriwal thanked his volunteers praising their work and asked them to relax for 2 days in a tweet.

After meeting with Delhi BJP president Satish Upadhaya today, Bedi said in a tweet that God willing, the exit polls would be proven wrong.

The BJP had then emerged the single largest with 32 seats.

The ABP-Nielsen poll said that AAP will get 39 while BJP 28 and Congress 3.

The highest number of 53 seats for AAP has been predicted by India News-Axis poll, which gave BJP 17 and Congress upto 2.